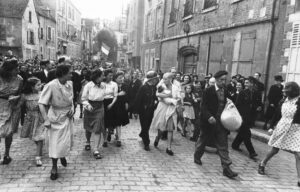 Having a baby is normally a blessed event, but it is also important to be having the baby with the right person. I know that sound like something that is between the man and the woman, and it’s nobody’s business but their own, and I would agree with you on that. However, during World War II, the Nazi regime was so hated that the nations they terrorized didn’t want anything to do with them…so much so that French women having babies with German soldiers were punished by shaving their heads bald and parading them through town. This was done so that everyone would know they betrayed their country, and so they had.

The Nazi regime was set on creating “the perfect race,” in their opinion anyway. They wanted everyone to be light skinned, blond haired, and blue eyed, and those who weren’t had to prove their genetic lines. The Nazis even went so far as to set up places that women (of the right bloodlines) were sent to have their children, conceived with German soldiers. Then, the plan was that they would give their children up for adoption by a Nazi couple who was having trouble conceiving. It was Hitler’s way of preserving the “right” bloodline. Many times, if the woman changed her mind, and wanted to keep the baby, but refused to marry the soldier, their babies were taken from the by force, even if it meant taking their lives. Some of these 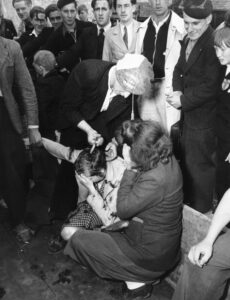 women were in it for the money and had no intention of keeping their babies. They were a simply a “Nazi Baby Machine.”

Once it was discovered that these women were doing this, they were marked as traitors. Often their own families disowned them. These women might not even be having babies with the Nazi soldiers, just having relations with them. The soldiers saw nothing wrong with hooking up with these women to ply them for information. It was an act of treason on the part of the women. They shouldn’t have allowed themselves to become involved with the Nazi soldiers, because they just had to know that was wrong. Treason is such a dark side of war. Still, there are many dark sides to war, and in most cases, it is the innocent and oppressed that suffer.

The French resistance brought out another dark side to the war, and it was rather brutal, but they felt like it was justified. Looking at it now, I think the beating part was the probably brutal, but maybe still have been justified. Basically, the French Resistance, when women were caught in a physical relationship with a Nazi, shaved their heads, beat the women who had been charged with collaborating with the enemy, and then paraded them around town as a form of punishment. The punishment was followed by harassing the women, with no repercussion for the beatings, head shavings, or the harassing. In France, a woman’s long hair is supposed to be seductive, so shaving their heads, was a way to make them look undesirable. The practice dates back to Biblical times. It was a common punishment for adultery. During the 20th century, it was reintroduced as a means to ridicule women who had physical relationships with the enemy or were prostitutes. 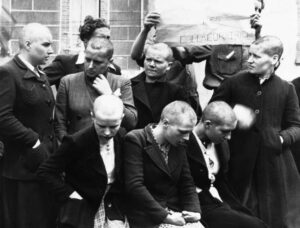 The French Resistance took a page from Bible times, and so it came to pass that during World War II, this act of humiliation was repeated on French women accused of collaborating with the German soldiers. Apart from shaving their heads, they were paraded in the streets, marked with black ink, and even stripped half-naked. At least 20,000 women have been documented to have had their heads shaved. I’m not a proponent of violence, but traitors need to be punished, and after something like that, I would think these women would think twice before getting involved with the Nazi soldiers. and any woman who hadn’t done so, would think twice before even considering such a heinous act.