The Last Ride Of Iron Jacket 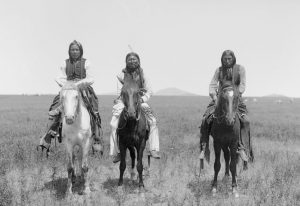 The battle for lands owned, desired, or presumed owned, is one that has raged in the United States for many, many years. When the pilgrims first came to the new world, it did not seem like a problem to the Native Americans, but as more and more “White Men” came, the Native Americans could see the writing on the wall. so to speak. They knew that their wide open spaces were in jeopardy, and they were determined not to lose the battle for their most prized possession…land. In the 18th and 19th centuries settlers from Europe moved westward across America in a steady wave. The migration overwhelmed ancient tribes like the Iroquois, the Cherokee, and the Shawnee. But when the settlers reached Texas and the lands of the Comanche, the migration stopped in it’s tracks. Many of the Indians back then were somewhat like the settlers. They had their villages, and they stayed in one place, or moved slowly from one place to another. The Comanche were just like that, until the horse arrived in North America. But the Comanche adapted to the horse like no other Native American group. They became nomads, following the buffalo, and as they exploded across the Texas plains, they virtually wiped out the Apache. Their enormous horse herds were legendary, as were their riding skills. While the Cheyenne and Sioux would dismount before battles, the Comanche mastered the art of fighting on horseback. They planted no crops, built no settlements, and shunned complex ritual or religion. The name “Comanche” was given to them by the Utes. It means “enemies.” 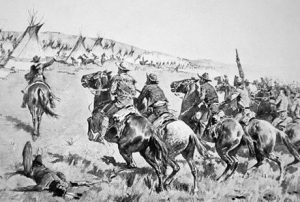 Unfortunately for the Comanche, they were no match for the settlers. After being beaten early on, the Comanche avoided direct conflict for the most part. They preferred to attack undefended farmhouses, slaughtering the inhabitants. It worked, the settlers were too afraid to travel into Comanche territory, and European expansion almost came to a screeching halt. In 1858, after a particularly bloody year, the Texas Rangers were ordered to take care of the Comanche. The empire of the Texas plains was a brutal and unchanging grassland of deadly heat and vast wildfires. No European had traveled very far into the territory, but now the Rangers intended to do just that. They were accompanied by a group of Tonkawas, a local tribe hated by other Native Americans for their cannibalism. The Comanche slaughtered the Tonkawas whenever possible, and the survivors were out for revenge. Together, the Rangers and the Tonkawas traveled for weeks, even fording stretches of pure quicksand, until they discovered a huge Comanche camp stretching along a creek in the Antelope Hills. The Comanche sprang onto their horses, but it was too late. They never expected to be attacked in the heart of the Comancheria and were in no position to fight. It looked as if all was lost, and indeed it was, but they did not know that yet. 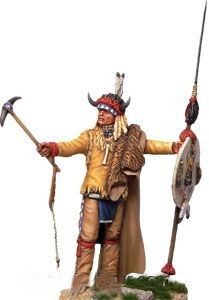 Suddenly, Chief Iron Jacket rode out of the chaos. His true name was Pobishequasso, but he was known as Iron Jacket for his ancient coat of Spanish armor, a family heirloom looted from the corpse of some unlucky conquistador. He exhaled great breaths of air as he rode toward the Rangers, working his medicine, which was said to blow bullets off target. The Rangers and the Tonkawas opened fire, but Iron Jacket kept coming. The bullets seemed to bounce off him, and for a moment, it seemed that he was unstoppable. Then, the magic ended. A hail of rifle fire cut down his horse, and a second volley finished Pobishequasso. His followers…armed only with lances and ancient muskets..fled, pursued by the Rangers, who picked off at least 76 of them. In the years that followed, the settlers became bolder, launching numerous raids into the Comancheria. Iron Jacket’s rusting armor was broken up for souvenirs. The reign of the Comanche was over.