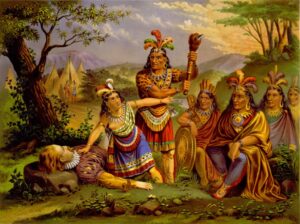 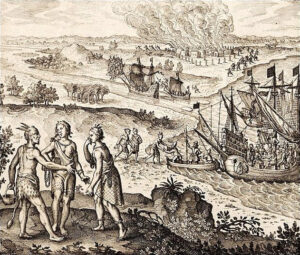 In May 1607, about 100 English colonists settled along the James River in Virginia to found Jamestown, which became the first permanent English settlement in America. Things were not going well for the settlers because of famine, disease, and Native American attacks. Then, 27-year-old English adventurer John Smith, began to directed survival efforts and mapped the area. Smith was exploring the Chickahominy River in December 1607 along with two colonists, when they were captured by Powhatan warriors. At the time, the Powhatan confederacy consisted of around 30 Tidewater-area tribes led by Chief Wahunsonacock, known as Chief Powhatan to the English. In the attack, Smith’s companions were killed, but he was spared and released. The reason, according to a 1624 account by Smith, was because of the dramatic intercession of Pocahontas, Chief Powhatan’s 13-year-old daughter. Pocahontas either had an aversion to the attacks that her people carried out on the settlers, or she could see the writing on the wall where the settlers were concerned, and knew that they would not leave, but would rather begin to cause great hardship on the tribes, because of the attacks. Her real name was Matoaka, but she was given the nickname, Pocahontas, by her father. It is a name that has been translated variously as “playful one” and “my favorite daughter.” In 1608, Smith was made president of the Jamestown colony, but that did not improve matters to a great degree, and the settlement continued to suffer. An accidental fire destroyed much of the town, and hunger, disease, and the Indian attacks continued. Things were not looking good for the settlers. Pocahontas did what she could to ease the situation, often coming to Jamestown as an ambassador of her father. Sometimes Pocahontas came bearing gifts of food to help the starving settlers. She became a friend of the settlers and soon became acquainted with English ways. Unfortunately, Smith was injured from a fire in his gunpowder bag and was forced to return to England in 1609.

With Smith no longer in charge, relations with the Powhatan deteriorated. The attacks continued, and many settlers died from famine and disease in the winter of 1609-10. The settlers were about to give up and go back to England…thereby abandoning Jamestown, when Baron De La Warr (also known as Delaware) arrived in June 1610 with new supplies. It was just in time, and the settlers began to rebuild the settlement. The Delaware River and the colony of Delaware were later named after Baron De La Warr. John Rolfe also arrived in Jamestown in 1610 and two years later cultivated the first tobacco there, introducing a successful source of livelihood that would have far-reaching importance for Virginia.

Still, things were far from perfect in the rea. In the spring of 1613, English Captain Samuel Argall took Pocahontas hostage, hoping to use her to negotiate a permanent peace with her father. Seriously, kidnapping a man’s daughter is hardly the way to make peace. Pocahontas was taken to Jamestown, where she was put under the custody of Sir Thomas Gates, the marshal of Virginia. The good news was that Gates treated her as a guest rather than a prisoner and encouraged her to learn English customs. She converted to Christianity and was baptized Lady Rebecca. After much trepidation, Powhatan agreed to the terms for her release, but by then she had fallen in love with John Rolfe, who was about 10 years her senior. On April 5, 1614, Pocahontas and John Rolfe married with the blessing of Chief Powhatan and the governor of Virginia. In this case, what might have been viewed as a marriage of convenience, was actually one of love…and of convenience. Their marriage brought a peace between the English colonists and the Powhatans, and in 1615 Pocahontas gave birth to their first child, Thomas. In 1616, the couple sailed to England. Dubbed the Indian Princess, Pocahontas proved popular with the English gentry, and she was presented at the court of King James I.

In March 1617, as Pocahontas and Rolfe were preparing to sail back to Virginia…in fact, the day before they 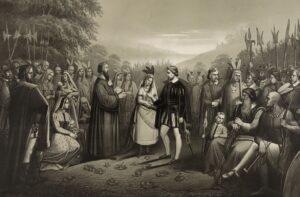 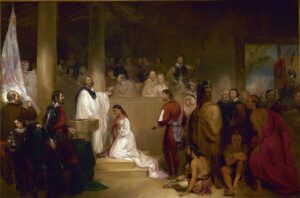 were to leave, Pocahontas died of smallpox. I’m sure Rolfe wished he had never brought her to England. She was buried at the parish church of Saint George in Gravesend, England. John Rolfe returned to Virginia and was killed in a Native American massacre in 1622. After an education in England, their son Thomas Rolfe returned to Virginia and became a prominent citizen.