Race To The Presses 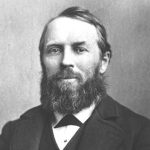 These days, it’s called scooping the story. A scoop is an item of news reported by one journalist or news organization before others have a chance to report the same story, and in modern times, it is vital to be the first one to report a story if possible, because in 5 minutes, it’s old news. While scooping is a big deal in today’s world, we wouldn’t think that in times past it would as big a deal as it is today, because of the instant source of information the internet provides. Nevertheless, we would be very wrong.

William Byers was a surveyor working in Oregon and Washington. He also served as a territorial When he heard about the discovery of gold and silver near Pike’s Peak area of Colorado, he decided fulfill a dream he had, and be the publisher of a newspaper. Byers arrived in Denver in March of 1959. Denver was quickly becoming a center for the mining industry in Colorado. Byers decided that it was the perfect location to begin publishing his newspaper, but Byers wasn’t the only journalist with this idea. As was the case in many western frontier towns, would-be journalists in Denver were vying for the honor of publishing the first newspaper.

Byers’ named his paper The Rocky Mountain News, because of the rugged mountains in the area. His biggest competitor was the Cherry Creek Pioneer, and both of them were rushing to get their newspaper into print. Byers set to work on the first edition of his newspaper shortly after he arrived in Denver in March. Working with a hand press in the attic of a local saloon…not the usual type of production office for newspapers, but it was what he had, so there in that dusty attic, byers got to work.

It was a race to the finish between the two competitors, and it was really anybody’s guess as to who would win. Each kept their production room private, so the other would not know the current status. Then, on April

23, 1859, beating the first release of The Pioneer by only 20 minutes, Byers became the first man to publish a news paper in Denver. It was the perfect scoop, but the term scoop, which is of American origin, and wasn’t documented until 1874. A verb, meaning to beat someone in reporting first, it is first used in 1884. By the time the other paper came out, 20 minutes later, any news that was new was now old news. Byers had successfully beat the competition. He died in 1903, having witnessed and shaped Denver’s transformation from a rugged frontier-mining town to a sophisticated business and financial center of the Rocky Mountain West.