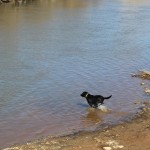 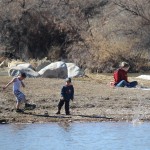 Every year in late February or early March, Bob and I take a three day weekend and head to Thermopolis to celebrate our wedding anniversary. It isn’t a long trip, but rather, a peaceful getaway. We have taken longer trips, and enjoyed them immensely, but the nice thing about going to Thermopolis is that there is very little to do in this small town, so you find yourself relaxing and doing the simple things. We like to take long walks along the river, and up by the hot springs. Most of the time I like to be alone…just the two of us, but today was a little different. It’s not that was were with a group of people, but rather the people we interacted with that were so interesting.

First there was the man with his dog. The dog was so happy to be playing in the water again 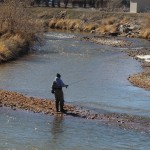 after such a long cold winter. Every time his master threw the toy into the water, the dog could hardly contain himself. He ran splashing into the river, grabbed his prize and brought it back to his master for another go. Then we watched two little boys who were happily throwing rocks into the river. Each one tried to find a bigger rock than their last one had been. They were quite the pair.

There were the fishermen and the strolling walkers, but the one who was the most interesting person who crossed our path was the little girl who was so excited about rushing the ducks, that she didn’t see that I was photographing them until it was too late. She quickly apologized, but I told her that she didn’t ruin my picture, but rather enhanced it. She then decided that the would do the same thing with some geese a little ways away, and I quickly snapped those shots too.

Normally, I enjoy just being in our own little space on the Thermopolis retreats we take, but the people around us this time, who were all excited about the fact that nice weather had finally 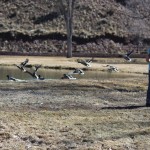 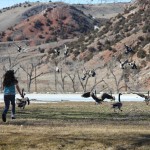 arrived…all expressing their own individual version of their excitement, were just too interesting to ignore, and we were quickly drawn into experiencing it with them. It was their expressions of the joys of being alive that made each of them interesting in their own way. And I found joy in simply watching them. Spring seems to have finally graced us with its presence, and after the long cold winter, that makes me feel amazing.