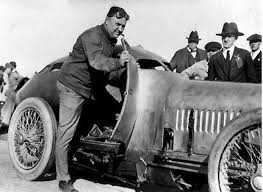 Since there were ways to race, people have been racing. From chariot races to horse races, people soon acquired a taste for speed and for competition. That has never gone away, even though some have paid a dear price for it. When the automobile was invented, it didn’t take long to get to the point of challenges and races. At first, these races took place on he city streets or on highways, but eventually they knew that there had to be a safer way to race.

The first organized race of the “horseless carriages,” as they were called, was held in France in 1894. The winning speed was less than 10 miles per hour and the winner was disqualified because his steam-driven tractor was deemed not to be a practical vehicle. To me, the whole race was laughable. Ten miles per hour is hardly what I would call a race. The final straw came on April 8, 1916, at the Boulevard Race in Corona, California, when an early racing car driver lost control and careened into a crowd of spectators. The 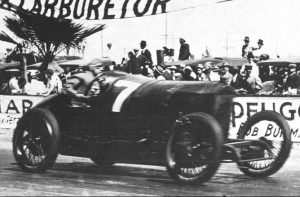 accident killed the driver and two other people. At that time, these racing events were still pretty rare, and this fatal accident encourage organizers to find a better place to hold car races. They came up with the idea of specially built tracks, instead of regular streets.

While it would seem like things would really get going after that, I wasn’t until twelve years later that the first Grand Prix was held. As time went on and speeds increased, the races became more dangerous. The deadly 1916 Corona Boulevard Race took place on Grand Boulevard in Corona, just east of Los Angeles. “Wild Bob” Burman, had previously set a world speed record for hitting 129 miles per hour. He was driving a blue Peugeot, and leading the race. Burman lost control when a wheel broke and his car crashed through a barrier. Burman died in the accident, along with his ride-along mechanic and a spectator. Five other people in the crowd were seriously injured.

Other racing events that followed, have been even more deadly. When a car crashed into a spectator area at 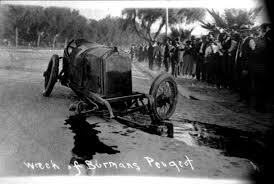 the 1955 Le Mans, 80 people were killed. Two years later in Italy, 10 spectators were killed at Mille Miglia. I was the last time that race was run. In July 1996, three separate races on the same day claimed victims among the spectators. But, probably the most dangerous of all races has been the off-road Dakar Rally. The best guess is that 47 competitors have been killed in the race’s 27 year history and many more spectators have also lost their lives. The original Dakar Rally ran from Paris to Dakar, Senegal, but fatal accidents in France forced a change in course. The routes have varied since 1999. Modifications have been made over the years to reduce the risk to the public, but drivers remained vulnerable, even to things like the many land mines in North Africa.