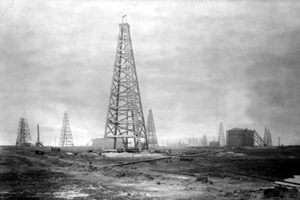 While most of the economy in Southeast Texas depended on agriculture, cattle ranching, and the lumber business in the 19th century, things were about to change. The presence of oil was known, but untapped until 1901 when the oil industry would change the landscape of the region. Uses for oil date back many years. In the 1500s, the Spanish used oil from seeps near Sabine Pass for caulking their ships, and to the north, settlers near Nacogdoches used seeping oil for lubricants before 1800. There were numerous discoveries in east and central Texas in the later 1800s, especially at Corsicana in 1896. Attempts were made to drill wells at Spindletop 1893 and 1896 and at Sour Lake in 1896, but they had no successful oil production along the Gulf Coast until the Lucas Gusher came in on Spindletop Hill on January 10, 1901.

Spindletop Hill was a salt dome oil field, that was located in the southern portion of Beaumont, Texas. People had long suspected that oil might be under the hill as the area had been known for its sulfur springs and 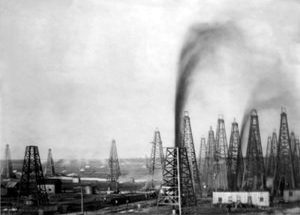 bubbling gas seepages that would ignite if lit. Then in August, 1892, several men including George W. O’Brien, George W. Carroll, and Pattillo Higgins formed the Gladys City Oil, Gas, and Manufacturing Company to do exploratory drilling on Spindletop Hill.

By September 1901, there were at least six successful wells on Gladys City Company lands. Wild speculation drove land prices around Spindletop to incredible heights. One man who had been trying to sell his tract there for $150 for three years sold his land for $20,000; the buyer promptly sold to another investor within fifteen minutes for $50,000. One well, representing an initial investment of under $10,000, was sold for $1,250,000. Legal entanglements and multimillion-dollar deals became almost commonplace. An estimated $235 million had been invested in oil that year in Texas; while some had made fortunes, others lost everything.

Following the success of the oil industry at Spindletop Hill, many people, including my grandparents, Allen and

Anna Spencer would make their way to Texas in search of a better life. They would settle on the oilfields near Ranger, Texas. They didn’t find any oil fields, so their income came from his work for other people in the oilfields. These days people working in the oilfield business make good money, but as near as I can tell oilfield workers averaged about 90 cents an hour in 1919, which would be about $11.74 an hour today. That’s pretty poor wages, especially for the oilfield, but I suppose people didn’t realize how valuable they really were. Needless to say, the oilfield was not the place my grandfather would choose to make his living, and eventually they returned to Wisconsin where he went to work for the railroad.