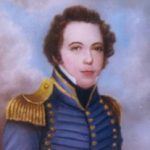 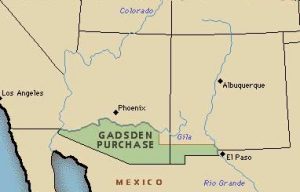 Most people have an idea in their head about what the continental United States looks like, but it was almost slightly different than it is now. The United States acquired the bulk of the southwestern corner of the nation from Mexico in 1848 as victors’ spoil after the Mexican War. However, congressional leaders who were eager to begin construction of a southern railroad, wanted to push the border farther to the south. The government directed James Gadsden, the American minister to Mexico, to negotiate the purchase of an additional 29,000 square miles. If you’re like me, you might be wondering what was so important about those 29,000 square miles. It’s a very small section, compared to other land purchases made by the United States, after all. Yet, this little piece of land was very important to the government. The purchase included lands south of the Gila River and west of the Rio Grande which the United States acquired so that it could construct a transcontinental railroad along a deep southern route, which the Southern Pacific Railroad completed in 1881/1883.

The purchase might not have been possible, were it not for the fact that the Mexican ruler, Santa Ana was eager to do business with the United States…despite having been badly beaten in war only five years earlier and forced to cede huge tracts of land to the victorious Americans. Santa Ana had only recently regained power, and he was in danger of losing office, unless he could quickly find funds to replenish his nearly bankrupt nation. Gadsden and Santa Ana agreed that the narrow strip of southwestern desert land was worth $10 million. When the treaty was signed on December 30, 1853, it became the last addition of territory…other than the purchase of Alaska in 1867…to the continental United States. The purchase also completed the boundaries of the American West.

In order to secure the area, the government established Fort Buchanan. It was also set up to protect emigrants traveling through the new territory from the Apache Indians, who were strongly resisting Anglo incursions, which they considered to be intrusive. With the outbreak of the Civil War four years later, northern politicians abandoned the idea of a southern line in favor of a northern route that eventually became the Union Pacific line, but the idea of a southern line remained…under the surface, but there nevertheless. It would take a number of years for that idea to become a reality, but since it did happen, I guess the original purpose for the purchase was honored after all.

On this day November 17, 1856, the United States founded Fort Buchanan, named after President James Buchanan three miles southwest of present-day Sonoita in Santa Cruz County, Arizona on the east slope of what is now called Hog Canyon. At the time, the area was under constant threat from hostile Apaches. Full-scale war with the local Chiricahua Apache was initiated by the Bascom affair in early 1861, during which 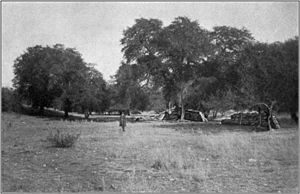 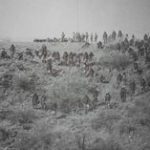 Lieutenant George Nicholas Bascom and his patrol were based at Fort Buchanan. The fort was officially abandoned in 1861, though troops of the California Column occasionally manned the post during the American Civil War. In February 1865, Apaches attacked and burned the fort in the Battle of Fort Buchanan, forcing the small garrison to retreat. It was then abandoned for good and Fort Crittenden was established half a mile east on the flats in 1867. Sadly, Fort Buchanan was never rebuilt.