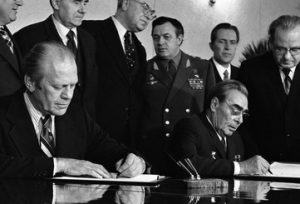 During the Cold War, the threat of a nuclear attack was the biggest concern in world relationships. During the late 1960s, the United States learned that the Soviet Union had embarked upon a massive Intercontinental Ballistic Missile (ICBM) buildup designed to catch up with the United States. The situation seemed to be heating up, because the Soviet Union seemed far more likely to use such weapons, so it looked like it was time to take action. In January 1967, President Lyndon Johnson announced that the Soviet Union had begun to construct a limited Anti-Ballistic Missile (ABM) defense system around Moscow. The development of an ABM system could allow one side to launch a first strike and then prevent the other from retaliating by shooting down incoming missiles. That was completely unacceptable.

President Johnson decided to call for strategic arms limitations talks…nicknamed SALT, and in 1967, he and Soviet Premier Alexei Kosygin met at Glassboro State College in New Jersey. Johnson said they must gain “control of the ABM race,” and Secretary of Defense Robert McNamara argued that the more each reacted to the other’s escalation, the more they had chosen “an insane road to follow.” Completely abolishing nuclear weapons would be impossible, but limiting the development of both offensive and defensive strategic systems could be done, and it might help stabilize relations between the 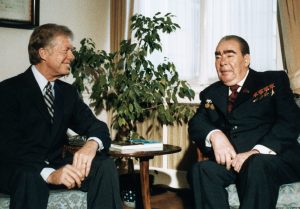 The SALT-II agreement was the result of those many nagging issues that were left over from the successful SALT-I treaty of 1972, but it had problems of its own. The treaty basically established numerical equality between the two nations in terms of nuclear weapons delivery systems. It also limited the number of MIRV missiles (missiles with multiple, independent nuclear warheads). In truth, the treaty did little or nothing to stop, or even substantially slow down, the arms race, and it met with unrelenting criticism in the United States. The treaty was thought to be a “sellout” to the Soviets. People believed that it would leave America virtually defenseless against a whole range of new weapons not mentioned in the agreement. Even supporters of arms control were less than enthusiastic about the treaty, since it did little to actually control arms. Nevertheless, during a summit meeting in Vienna, President Jimmy Carter and Soviet leader Leonid Brezhnev signed the 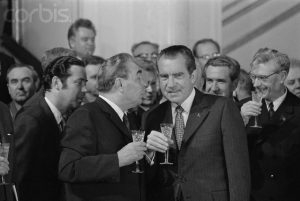 SALT-II agreement dealing with limitations and guidelines for nuclear weapons, on June 18, 1979. The treaty, would never formally go into effect, and it proved to be one of the most controversial agreements between the United States and the Soviet Union of the entire Cold War. Debate over SALT-II in the U.S. Congress continued for months. Then in December 1979, the Soviets invaded Afghanistan. The Soviet attack effectively killed any chance of SALT-II being passed, and Carter ensured this by withdrawing the treaty from the Senate in January 1980. SALT-II thus remained signed, but was never ratified. During the 1980s, both nations agreed to respect the agreement until such time as new arms negotiations could take place.