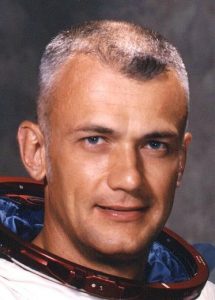 These days, lots of people have used hang-gliders, or squirrel suits, or parachutes to be able to “fly” without the use of an airplane, and lots of people absolutely love the rush they get from it. I suppose it would be very cool, but the clear fact is that, in reality, you are performing a fall of sorts, with a landing definitely in the future. There is no ability to go back up with the equipment you have.

I guess that makes the flight that Captain Bruce McCandless II took on February 7, 1984 very unique. McCandless was a NASA astronaut aboard the space shuttle Challenger, as a mission specialist on STS-41B (February 3-11, 1984), when he became the first human to fly in space…untethered. This is not a falling situation. In fact, had he not initiated the jet packs power to maneuver his way back to the shuttle, he could have floated around in space forever. Of course, he did not choose to do that, and so after 5 hours and 55 minutes, McCandless maneuvered the bulky white rocket pack, of his own design, back to the space shuttle. I think that deep down inside him, he must have thought, “No!!! I don’t want it to be over yet!!” The feeling of exhilaration over what he had accomplished, must have give him the ultimate adrenalin rush!! A rush like no one else had ever felt before. McCandless orbited the Earth in tangent with the shuttle at speeds greater than 17,500 miles per hour and flew up to 320 feet away from the Challenger. Then, after an hour and a half testing and flying the jet-powered backpack and admiring Earth, McCandless safely reentered the shuttle.

Later that day, Army Lieutenant Colonel Robert Stewart tried out the rocket pack, which was a device regarded as an important step toward future operations to repair and service orbiting satellites and to assemble and 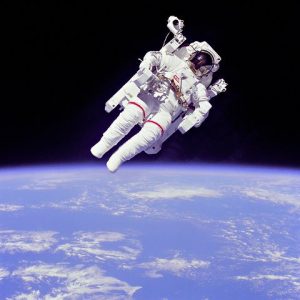 maintain large space stations. It was the fourth orbital mission of the space shuttle Challenger. His untethered space walk lasted 6 hours and 17 minutes. The rocket pack worked beautifully. It was a great advancement, but my mind goes back to the man. How did he feel when he took that first step out into space, knowing that if this didn’t go as planned, he could be lost in space forever? Then, he took a leap of faith, and stepped out. It must have been exhilarating and terrifying at the same time. Then when he realized that he could make the rocket pack do what he wanted it to, he must have been elated. What a rush that must have been, and for just a little while, he was alone…not only in space, but in that fact that he was the only one who had been there without being tied to a shuttle for safety. How amazing that must have been.