They Should Stay Together 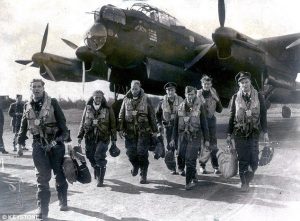 In April of 1943, during a raid on a Czechoslovakian arms factory, a British bomber crashed in Germany, going down with seven crew members on board. At the time of the crash, German soldiers recovered two of the bodies, but somehow they didn’t find or recover the bodies of the other five crewmen. It seems odd to me that they couldn’t find them, or that they somehow just chose not to bury the remaining five crewmen. Because the extensive search, following the war, produced nothing, the British Air Ministry assumed that the plane had ditched in the sea.

The plane, an Avro Lancaster, piloted by Alec Bone, took off from Lincolnshire, England, almost 76 years ago. Their target was a munitions plant in German-occupied Czechoslovakia. A total of 327 bombers took off that day, and 36 would never return. Bone’s plane was one of those unfortunate 36 planes. It is believed that he and his crew battled German antiaircraft fire before plunging into a field outside Laumersheim in southwestern Germany. As it searched in vain for the missing crew in the years following World War II, the British Air Ministry had no idea that German troops had already buried two of the men in Mannheim.

There was, however, one person who knew the location of the plane…Peter Menges, who was a teenager at the time he witnessed the fiery crash of the British bomber. It was a site he would ever forget, but I’m sure he assumed that the Germans had found it too, and gone to remove the bodies or any survivors. This whole 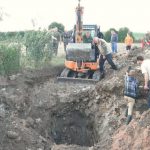 situation made me wonder why the other five men were not buried too. Upon researching this crash, I think I have discovered why. Most of us picture a plane crash with a broken plane and the bodies of the dead lying almost peacefully nearby, but most often it isn’t like that at all. When airplanes crash, they hit the ground going very fast, and the human body doesn’t handle that kind of impact very well. In fact it reacts much like an explosion, with pieces scattered all over the place. And when a plane nose dives into the ground, burying itself deep in the ground, like this one did, those body parts are often buried too.

Menges who was 83 in 2012, when he told the tale of the fiery crash of Alec Bone’s plane. He had joined forces with Uwe Benkel, a health insurance clerk, who moonlighted as a military history researcher. Together they have helped to recover more than 100 planes. Upon learning of the exact location of the crash, a team of men used metal detectors and ground-penetrating radar to confirm the crash location near Laumersheim. Their search first unearthed the bomber’s engine and landing gear, along with hundreds of bone fragments thought to be the remains of the missing men. My guess is that because of the planes burial at the site, and the fact that most of the bodies were blown to bits at the time of the impact, the German soldiers who were at the scene to bury the bodies that day, simply could not find the other bodies.

Because no one knew where to look, the families never knew what happened for sure. They could only speculate. Now, the remains of the five British airmen have been found. Their relatives have been notified and 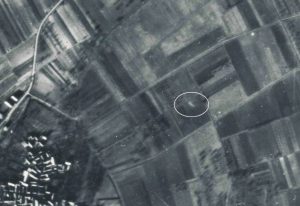 plans are being made to bury the men in a shared coffin at Germany’s Commonwealth War Graves Cemetery. Benkel told British news sources that area residents wondered why he was searching for former enemies who had bombed German cities. “It doesn’t make a difference if they are German or British,” he told The Telegraph. “They were young men who fought and died for their country for which they deserve a proper burial in a cemetery.” I agree. No matter which side of a battle a soldier fought on, he fought to the best of his or her abilities, and that deserves respect, and a proper burial. “They flew together and died together,” says Mr Benkel. “It is only right that they should stay together.”