Sometimes…It Is Who You Know 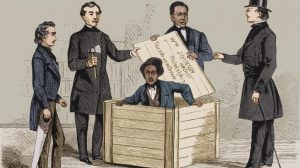 There are times when what you know is what gets you through a bad situation, but there are some situations that really do requiring knowing someone who can help. For the slaves in the pre-emancipation era of the United States, that was as true as it gets. The slaves had none of the most important asset needed for escape…money. That didn’t stop the attempts. One slave who was from the deeper south, Henry “Box” Brown, decided to mail himself to safety. That did work, but not everyone had the ability to get that done, and so the majority just decided to make a run for it…only to be met by dogs or Bounty Hunters…neither was going to have a good outcome.

One rather famous slave named Mustapha, teamed up with a white hunchback named Arthur Howe and conned his way to freedom. It was probably the most outrageous, and yet the best planned escape there was. The plan was simple, the pair traveled through North Carolina and Virginia, telling anyone they met that Mustapha was Howe’s slave. Since Howe was famous for his fearsome appearance and “expressive of dark angry passions,” that few people dared to ask any more questions. Whenever Howe and Mustapha, reached a town, Howe would sell Mustapha for a tidy fee. After a few days recuperating, Mustapha would escape again and the partners would resume their journey. Not only did this help avoid bounty hunters, who would be looking for an escaped slave, rather than a current one, it brought in a tidy profit as well. Mustapha was quite a brave man. He was not worried that he would not be able to escape the people he was sold too. Most slaves struggled to escape once…Mustapha did it every week. 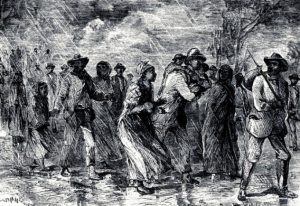 He also had to trust Howe to continue to be there waiting for him so they could continue their journey.

The plan worked perfectly and as planned the pair parted ways, after reaching Petersburg or Richmond. This put Mustapha free to make his escape north. Since he was not apprehended, it is believed that this was what happened. No one is exactly positive about that, but the duo dropped out of history after that, so it is believed to be the way everything went down. When we look back on the many deaths that followed an escape attempt, I have to think that it is sad that more slaves didn’t think of this idea. I’m sure the many slave owners who were scammed though, I think there was a little justice in the world after all.