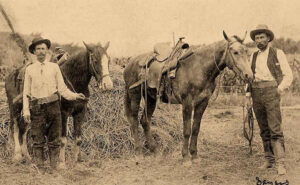 Charles Angelo “Charlie” Siringo didn’t set out to be a lawman, a detective, or a bounty hunter, but the circumstances of his life put him in places where things just fell into place to bring his future into being. Born on February 7, 1855, on the Matagorda Peninsula in Matagorda County, Texas. His mother was an Irish immigrant, and his father was an Italian immigrant from Piedmont. His father died when Siringo was a year old. Siringo attended public school until the start of the American Civil War. In 1867, when he was just 12 years old, Siringo took his first cowpuncher lessons, before moving to Saint Louis after his mother remarried.

Siringo attended Fisk public school for a while in New Orleans, but school wasn’t really of interest to him, so he started work as a cowboy for Abel Head “Shanghai” Pierce in April 1871, after returning to Texas. He was just 16 years old, and yet he had done more in his short lifetime that most people would have dreamed of doing. And yet, that was just the beginning. In July 1877, Siringo was in Dodge City, Kansas, where he survived an encounter with Bat Masterson.

Then, Siringo started working for the LX Ranch working as a cattle drive cowboy. This was an unusual kind of cattle drive job, in that it also entailed chasing after LX cattle stolen by Billy the Kid in 1880. By 1884, Siringo 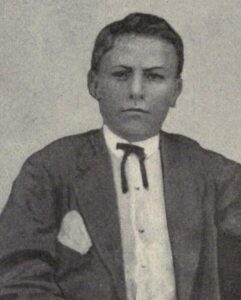 was married Mamie and he quit working for LX Ranch. He opened a tobacco store in Caldwell, Kansas. He and Mamie had a daughter named Viola, born on February 28, 1885. At this point, it seemed prudent to find a safer kind of work, so he began writing his autobiography, “A Texas Cow Boy; Or Fifteen Years on the Hurricane Deck of a Spanish Pony.” A year later, it was published and well received. Siringo moved his family to Chicago in the spring of 1886 for publication of a second printing.

In 1886, Siringo witnessed the Chicago Haymarket affair. “The Haymarket affair (also known as the Haymarket massacre, the Haymarket riot, or the Haymarket Square riot) was the aftermath of a bombing that took place at a labor demonstration on May 4, 1886, at Haymarket Square in Chicago, Illinois, United States. It began as a peaceful rally in support of workers striking for an eight-hour workday, the day after police killed one and injured several workers. An unknown person threw a dynamite bomb at the police as they acted to disperse the meeting, and the bomb blast and ensuing gunfire caused the deaths of seven police officers and at least four civilians; dozens of others were wounded.”

Seeing all that destruction prompted Siringo to join the Pinkerton National Detective Agency. He used gunman Pat Garrett’s name as a reference to get the job, having met Garrett in 1880, when they were searching for Billy the Kid. Siringo was hired immediately, and assigned to Denver, reporting to James McParland. He moved his family to Denver, where his wife died in 1890, leaving him with his young daughter to raise. Eventually she went to live with his wife’s aunt and her husband, Emma and Will F Read. Siringo was then assigned several 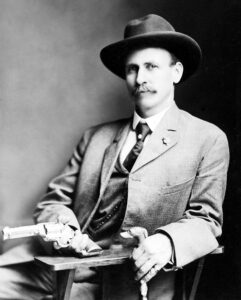 cases, which took him as far north as Alaska, for the Treadwell mine, and as far south as Mexico City. Using a relatively new technique at the time, he began operating under cover as Charles L Carter and infiltrated gangs of robbers and rustlers, making more than 100 arrests.

Siringo had a difficult married life, following his first wife’s death. It makes you wonder if he would have stayed married, had she lived. A second marriage in 1893 to Lillie Thomas ended in divorce after three years. They had a son named William Lee Roy. After the divorce, Lillie took their son and moved to Los Angeles. Two other marriages, one in 1907 to a woman named Grace and one in 1913 to a woman named Ellen Partain. Each of these lasted only a few months. Finally, Siringo moved to California to be closer to his children. In the end, it wasn’t his cowboy years or his detective years that really made Siringo famous, but rather his writing. Siringo was the author of seven books. Siringo died on October 28, 1928, in Altadena, California.