They Were Not Broken 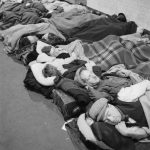 During World War II, the Germans began a bombing campaign, during the Battle for Britain, that was known as the Blitzkrieg, which means lightning war. The name was often shortened to the Blitz. The Blitz began on September 7, 1940 and would continue until May 1941. During these bombing raids, London was especially badly hit. At the start of the campaign, the government did not allow the use of underground rail stations as shelters, as they considered them a potential safety hazard. However, the people of London took the matter into their own hands and opened up the chained entrances to the tube stations. In the Underground they were safe from the high explosive and incendiary bombs that rained down on London night after night. With one or two exceptions, their confidence was rewarded. The City tube station was hit when a bomb went through the road and fell into it. Over 200 were killed, but for the most part the tubes proved to be good bomb shelters.

One eyewitness to the tube shelters said, “By 4.00 p.m. all the platforms and passage space of the underground station are staked out, chiefly with blankets folded in long strips laid against the wall – for the trains are still running and the platforms in use. A woman or child guards places for about six people. When the evening comes the rest of the family crowd in.” To start with the government underestimated the potential use of the underground stations. The government estimated that 87% or more of people would use the issued shelters…usually Anderson shelters…or spaces under stairs, and such. They assumed that only 4% of the population would use the underground stations. However, each night underground stations played host to thousands of families in London grateful for the protection they afforded. On November 8, 1940, a request 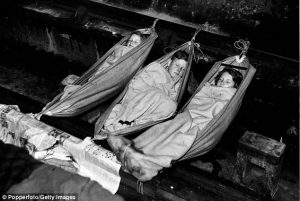 went out for blankets to aid the people sleeping in these underground tunnels. Times were hard in many areas of the London, and many Londoners spent their winter nights in the underground tunnels and shelters. Supplies of any new or old blankets that could be spared were called for in order to provide additional warmth for these people.

London went into mandatory blackouts every night to try to be invisible to the bombers. Despite the blackout restrictions, the Luftwaffe had a relatively easy way of getting to London. They simply followed the route of the River Thames, which also directed them to the docks based at the East End of the city. Each night, the bombers first dropped incendiary bombs designed to give the following bombers the most obvious of markers. After the incendiary bombs, came the high explosives. The government used its control over all forms of the media to present a picture of life going on as normal despite the constant nightly attacks. I suppose some would call this fake news, but it was the governments way of making it look like the Germans weren’t making any headway. They did not show photos of people known as trekkers, the families who would spend the night away from their homes, preferably in local woodland or a park where they felt safer from attack. Such photos were censored. An American film called “London can take it” presented the image of a city devastated by bombs, but one that carried on as normal. The narrator makes the point that “bombs can only kill people, they cannot destroy the indomitable spirit of a nation.”

However, we know that in reality, life was not quite as easy as propaganda showed. Indeed, London could take it, but only because there was little else they could do. Under wartime restrictions, people could not simply 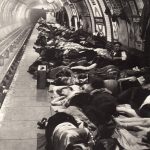 leave their homes and move elsewhere. The poorest in London lived in the East End, and it was this area that was especially hit hard by bombing because of the docks that were based there. However, most of the families there could do little else except stay where they were unless specifically moved by the government. These families developed what became known as a war-time spirit. They adapted their lives to the constant night-time bombing. By May 1941, 43,000 had been killed across Britain and 1.4 million had been made homeless. Not only was London attacked, but so were many British cities. Coventry and Plymouth were particularly badly bombed but most of Britain’s cities were also attacked, including Manchester, Glasgow, and Liverpool. Nevertheless, they were not broken.