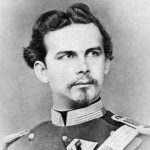 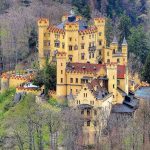 King Ludwig II, who became king of Bavaria at the young age of 19, in 1864, had what many might consider to be a strange obsession…castles. Of course, for a king to love palaces isn’t totally crazy, but he actually took it to another level, and one that many of us can see to this day. I think I can understand his obsession with castles. Though I have never been in one, I have taken virtual tours of several, and they are beautiful.

Ludwig was a strange king, I suppose, but while castles should have been rather common things to him, he found them to be fascinating. It’s possible that his obsession began in the breathtaking Hohenschwangau Castle, where he grew up. It seems rather strange for a king, or prince, to really take much notice of such places, but maybe King Ludwig II was as much an architect as he was a king. The Hohenschwangau Castle was originally built in the 12th century, but was destroyed by Napoleon. Ludwig’s father had the castle rebuilt, and it currently looks just like it did in 1836. Maybe young King Ludwig II’s infatuation with castes began as he heard the stories about his home being destroyed and rebuilt.

It is thought that his fascination really began to grow when he took a trip to France and saw the Palace of Versailles and Chateau de Pierrefonds. He returned to Bavaria intent on building a culture there like that of France. Of course, building castles is an expensive venture, and King Ludwig II is said to have neglected his duties as king to follow this new passion, and in so doing, he “racked up” a debt of nearly 14 million marks. I’m sure his people weren’t very happy with him, but as we of the more “touristy” persuasion would have to agree, the castles he created were magnificent.

Among the greatest of his castles are Neuschwanstein and Linderhof. From his bedroom in Hohenschwangau, Ludwig trained a telescope on a ridge to keep an eye on Neuschwanstein as it was being constructed. It is said 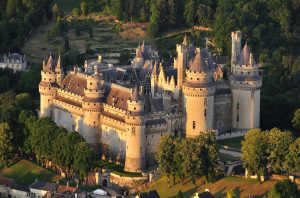 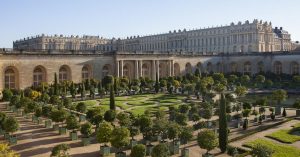 that Neuschwanstein is the castle that inspired Walt Disney when he created the well-known castle of Disneyland fame. Ludwig’s extravagance and romanticism earned him the nickname of “Mad” King Ludwig. Nevertheless, with their towering turrets in a striking setting, these castles are a huge hit with sightseers. Every tour bus in Bavaria converges on Neuschwanstein and Hohenschwangau, while more tourists flush in each morning by train from Munich, two hours away. Ludwig also commissioned the building of Herrenchiemsee (a partial replica of the Palace of Versailles) and a castle of Falkenstein, but these were never completed.

The homiest of Ludwig’s castles is the small and comfortably exquisite Linderhof, set in the woods 15 minutes from Oberammergau, the Shirley Temple of Bavarian villages (a 45-minute drive from Hohenschwangau). Surrounded by fountains and sculpted, Italian-style gardens, it inspires a feeling of palace envy. Ludwig lived much of his last eight years at Linderhof. He was frustrated by the limits of being a constitutional monarch, so he retreated there. At Linderhof, he was able to live in a private fantasy world where his lavishness glorified his otherwise weakened kingship. He lived as a royal hermit, his dinner table…pre-set with dishes and food…rose from the kitchen below into his dining room so he could eat alone. Beyond the palace is Ludwig’s grotto, a private theater for the reclusive king to enjoy his beloved Wagnerian operas, Here he was usually the sole member of the audience. The grotto features a waterfall, fake stalactites, and a swan boat floating on an artificial lake. The first electricity in Bavaria was generated here, to change the colors of the stage lights and to power Ludwig’s fountain and wave machine. 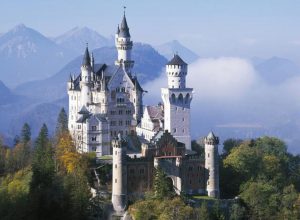 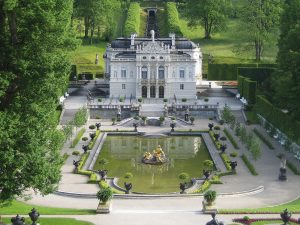 Ludwig was king for 23 years. In 1886, being fed up with his extravagances, royal commissioners declared him mentally unfit to rule Bavaria. Days later, he was found dead in a lake. People still debate whether it was murder or suicide. But no one complains anymore about the cost of Ludwig’s castles. Within six weeks of his funeral, tourists were paying to see the castles…and they’re still coming.