battle of the little bighorn 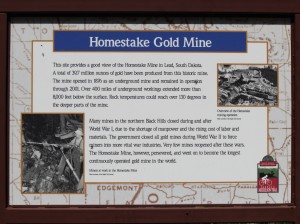 As Bob and I were on our walk on the Mickelson Trail last week, we came across an informational sign on the Homestake Mine. I was really quite surprised as some of the information it contained. Of course, I had read about the discovery of gold in the Black Hills of South Dakota…who hadn’t. The exact date of the discovery is unknown, but the discovery brought many people to the Black Hills…which was in direct violation of the treaty with the Lakota and Cheyenne Sioux Indians. That discovery also brought about the Great Sioux War of 1876…also known as the Black Hills War. Most people will remember that it was during this war, that George Armstrong Custer made his last stand at The Battle of The Little Big Horn.

The Homestake Mine, near Lead, South Dakota, was founded in 1876 and while it changed hands several times, it was in operation until all the gold mines were mandatorily shut down to encourage the miners to work in more important fields to help with the war effort in World War II. The thing that surprised me the most was that most of the gold mines did not reopen after the war was over. Gold is such a valuable metal, so why would the mines not reopen? One thought comes to mind. Gold was mined underground, sometimes deep underground, as in the case of the Homestake Mine. Underground mining is dangerous as we have seen over the years, with cave-ins and blasts from the gases that can be found there. I have to wonder if the men decided that the new skills they had learned during World War II were a better way to make money and maybe, stay alive.

Nevertheless, the Homestake mine was one that reopened after the war, and then went on to continue to be a successful mine until their last production of ore in 2001. The Homestake Mine ceased production at the end of 2001, due to low gold prices, poor ore quality, and high costs. The Homestake Mine Company had merged with The Barrick Gold Corporation and they were dewatering the mine as DUSEL negotiations continued. This was a slow process and very expensive at $250,000 per month. The mining company was having great difficulty justifying the cost, and the process ceased on June 10, 2003 and the mine was closed completely. 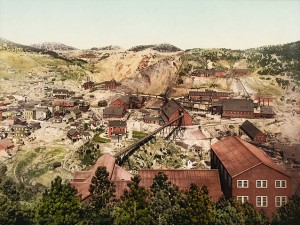 These days, there are a number of operating gold mines around the country, but the state with the largest production of gold is Nevada. The need and desire for gold did not cease after World War II, it was probably just more that a lot of mines didn’t produce the quality or quantity that was really needed to be successful. It almost seems as if the closure of the mines in World War II had a greater impact than anyone would have ever expected. Whatever her end was, the Homestake was not a casualty of the World Wars, and went on to become the longest continuously operating gold mine in the world.