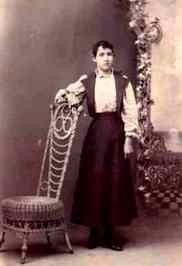 Myra Belle Shirley was born in a log cabin near Carthage, Missouri on February 5, 1848 to “Judge” John Shirley, and his third wife, Elizabeth “Eliza” Pennington. John Shirley was the black sheep of a well-to-do Virginia family who had moved west to Indiana, where he married and divorced twice. His third wife, Eliza, was on the Hatfield side of the feuding Hatfield and McCoy families, which ranks up there with people I wouldn’t want for parents. The Hatfield and McCoy feuds, while not starting until about 1865, went on for decades, and they were messy and confusing over those years. You might no know who Myra Belle Shirley was, or you might know her best at Belle Starr.

Myra grew up in a well to do family, after her father John Shirley made good in 1856 when he and his wife sold their financially successful farming venture raising wheat, corn, hogs, and horses in Jasper County, Missouri. When John sold the land, they opened an inn, a tavern, livery stable and blacksmith shop. Their businesses took up almost an entire city block. John Shirley had become a respected member of the burgeoning county seat of Carthage, and his daughter Myra Belle lived the life of a spoiled, rich girl, attending the Carthage Female Academy, where in addition to the basics, she was taught music and classical languages. She was a bright student, with polite manners, and a talent for playing the piano. However, she also liked to flaunt her status a “rich girl” and liked having an audience. She also loved the outdoors, where she spent many a day roaming the countryside with her older brother Bud, who taught her how to ride a horse and handle a gun…a little out of the ordinary, but still within the confines of a proper upbringing, but dramatic changes were coming for Myra.

When the Kansas-Missouri Border War broke out. Jasper County watched both armies pass through time and again, forcing residents to take sides, and making neighbors into bitter enemies. Irregular bands of “Jayhawkers” and “Red Legs” laid waste to Missouri communities in support of the Union. When son Bud joined Quantrill’s Raiders, John Shirley was a proud father. Bud, who knew the area and the people well, served admirably as a scout, quickly attaining a captain’s rank. But in June 1864 Bud was killed in Sarcoxie, Missouri. The raids had taken their toll on Shirley’s businesses and after Bud’s death, the “Judge” gave up, sold his Missouri property and moved his family to a farm near Scyene, Texas, a small settlement southeast of Dallas.

In 1866 the James-Younger Gang robbed their first bank in Liberty, Missouri, and fled with $6,000 in cash and bonds. Splitting up, Jesse and Frank James, along with the Youngers, fled to Texas, where they met up with Myra Shirley. Soon, Myra became smitten by Cole, quickly becoming a member of their “gang.” One of these outlaw bands, seeking refuge, stayed at the Shirley house one night. Belle later stated that it was there that she became reacquainted with the first man she ever loved. His name was Jim Reed, and she had first met him back in Missouri, where the Reed and Shirley families had been friends. The romance blossomed in Texas, and Belle and Jim married on November 1, 1866. The Shirleys had no objection to the marriage, as Jim Reed was not yet a wanted man. Jim moved into the Shirley household near Scyene and shared the farm chores. Later, he became a salesman for a Dallas saddle and bridle maker. By late 1867, though, he and Belle were living on the Reed homestead in Missouri. Early in September 1868, Belle gave birth to her first child, Rosie Lee. Belle adored the baby and referred to her as her “Pearl.” The nickname stuck. When Jim and Belle moved to Missouri, Reed was a wanted man, allegedly for murdering a man named Shannon. The two fled to California with their young daughter Pearl and before long a second child came along who they named Edward.

In 1869 Belle, Reed and two other outlaws rode to the North Canadian river country, where they tortured an old Creek Indian until he told them where he had hidden $30,000 in gold. With their share of the loot, Jim and Belle returned to Texas, where she played the role of “Bandit Queen” to the hilt. But, it wasn’t long before the outlaw life caught up with Reed and on August 1874, Reed was killed in a gunfight by a member of his own gang. Belle left her children with her mother while she rode the outlaw trail. In Indian Territory (what is now Oklahoma,) Starr got involved with a flat-faced Indian outlaw who went by the name of “Blue Duck.” Of her life, Belle Starr stated to The Fort Smith Elevator about one year prior to her death, “I regard myself as a woman who has seen much of life.” On February 3, 1889, two days before her 41st birthday, she was killed. She was riding home from a neighbor’s house in Eufaula, Oklahoma, when she was ambushed. After she fell off her horse, she was shot again to make sure she was dead. Her death resulted from shotgun wounds to the 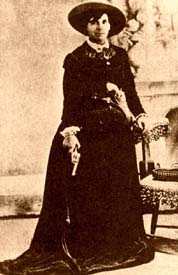 back and neck and in the shoulder and face. Legend says she was shot with her own double barrel shotgun. According to Frank “Pistol Pete” Eaton, her death was due to different circumstances. She had been attending a dance. Frank Eaton had been the last person to dance with Belle Starr when Edgar Watson, clearly intoxicated had asked to dance with her. When Belle Starr declined, he later followed her. When on the way home, she stopped to give her horse a drink at a creek, he shot and killed her. According to Frank Eaton, Watson was tried, convicted and executed by hanging for the murder.

Belle’s children didn’t do much better, and turned out as one would expect, with the influence their mother had on them. Belle’s son, Eddie Reed, was convicted of horse theft and receiving stolen property in July 1889. Judge Parker sent him to prison in Columbus, Ohio. Belle’s daughter, Rosie Reed, also known as Pearl Starr, became a prostitute to raise funds for Eddie’s release. She did eventually obtain a presidential pardon in 1893. Ironically, Eddie became a deputy in Fort Smith and killed two outlaw brothers named Crittenden in 1895, and was himself killed in a saloon in Claremore, Oklahoma on December 14, 1896. Pearl operated several brothels in Van Buren and Fort Smith, Arkansas, from the 1890s to World War I.