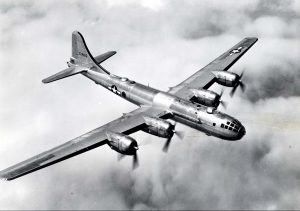 Since my dad was in the Army Air Forces in World War II, the B-17 is a plane that I have researched, watched documentaries and movies about, and toured. The B-17 was called the Flying Fortress, and my dad always said that it was a very safe plane. Nevertheless, as much as I love the B-17 Bomber, there are other war planes that were also stars of World War II. Sometimes, I think that I forget about all those others planes.

One of those planes, the B-29 Superfortress actually made its debut flight in Seattle Washington on this day, September 21, 1942. The B-29 was the largest bomber used in World War II, by any nation. The B-29 was the brain child of General Hap Arnold, back in 1939. Arnold worried that a German victory in Europe would mean the United States would have no bases on the eastern side of the Atlantic from which to counterattack. They needed a plane that could travel faster, farther, and higher than anything that was available then. Taking on the challenge, Boeing set out to create such a plane.

The plane they came up with was amazing. It could carry loads that were nearly its own weight and at altitudes 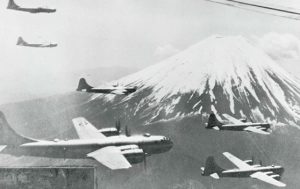 of 30,000 to 40,000 feet. The plane boasted a pilot console in the rear of the plane, capable of running the plane in the event the front pilot was knocked out of commission. It also had the first radar bombing system of any US bomber. While the Superfortress first took flight on September 21, 1942, it would not make its bombing debut until June 5, 1944, in a battle against Bangkok, as the Allies prepared to liberate Burma from the hands of the Japanese. Then a little over a week later, it was used against mainland Japan on June 14, when 60 B-29s based in Chengtu, China were used to bomb an iron and steel works factory on Honshu Island. It wasn’t exactly a successful mission, but it did boost the morale of the Americans.

The United States recaptured the Marianas Islands in the South Pacific, because they were the perfect location for air bases for the new B-29s to strike mainland Japan on a consistent basis. When the bases were up and 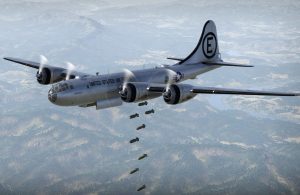 running, they were used to coordinate a series of bombing raids against Tokyo. While the B-29s were capable of precision bombing at high altitudes, they began dropping incendiary devices from a mere 5,000 feet, firebombing the Japanese capital attempting to break the will of the Axis power. One raid, in March 1945, killed more than 80,000 people. But for the Superfortress, the most famous use would happen in August. It was the only plane capable of delivering a 10,000 pound bomb…the atomic bomb. The Enola Gay took off on August 6th and the Bock’s Car took off on August 9th both from the Marianas, and flew into history. Of course, we all hope that such a bomb run would never be necessary again, but if it had been, it was good to know it was available.