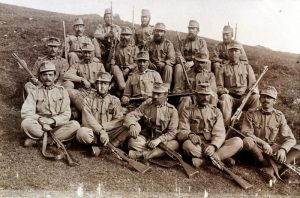 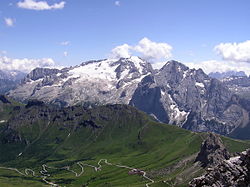 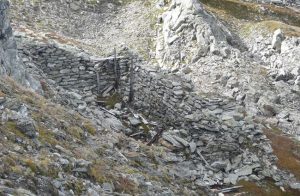 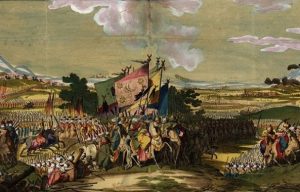 Through the years, people have been known to self destruct. Suicide is, unfortunately, not that uncommon, but this is not a story of suicide, spontaneous combustion, or accidental overdose. It is rather a story of an Army that “self destructed.” An entire army, although, some of them might have survived the “attack.” The insanity happened during the Austro-Turkish (Hapsburg-Ottoman) War, which lasted from 1787 to 1791, and occurred at almost the same time as the Russo-Turkish War was being fought, in which the Austrians were allies of Russia to fight a common foe. The Austrian (or Hapsburg Empire) Army at that time was composed of Austrians, Czechs, Germans, French, Serbs, Croats, and Polish, effectively making communication difficult, and a similar communications issue as the Tower of Babel, as possible. Most of the facts about the Austro-Turkish War were not written until 1831, when they were compiled in the Austrian Military Magazine. Another source was the German account by A. J. Gross-Hoffinger in Geschichte Josephs des Zweiten, which was itself not compiled until around 60 years later. Yet another, albeit less popular source, was the 1843 account of the war in “History of the Eighteenth Century and of the Nineteenth till the Overthrow of the French Empire, with particular reference to mental cultivation and progress.”

The “Battle of Karansebes,” apparently took place in the town of Karansebes, in present day Romania, on September 17th, 1788. Austria at that time was fighting with Turkey for control of the Danube River. The battle started with a number of Austrian cavalrymen soldiers on a night patrol. Looking for Turkish soldiers in the area where the Austrian Army had set up camp earlier that day, the Austrian Army night patrol chanced upon some Gypsies across the river. The Gypsies offered them Schnapps to relieve the war-weary soldiers. Seeing a chance to relax before the next day’s battle, the soldiers began drinking…their first mistake. Later, a contingent of Austrian infantry men found the cavalrymen having a party and wanted to join in. However, the cavalrymen refused them the alcohol…their second mistake, and the one that started a quarrel that turned into a fistfight. The next thing anybody knew, a shot was fired across the river. Some infantrymen in the distance shouted, “Turks, Turks,” mistaking the gunshot as coming from the enemy Ottoman Turks. Both parties, Austrian infantrymen and Austrian cavalrymen alike, fled back to the other side of the river where they camped, but by that time, chaos and disorder had taken over. Some soldiers were fleeing due to unpreparedness, while some German officers shouted, “Halt! Halt!.” Non-German soldiers not understanding the German language, and thought it meant “Allah”, referring to the Islamic Turkish making cries unto their God. This prompted the majority of the Austrian Army to start shooting at each other. Everyone commenced shooting at fellow Austrian and even shadows, thinking the enemy was upon them. Soon, an Austrian corps commander, thinking that a cavalry attack from the Turkish Army was in progress, ordered artillery fire on his own men!

The casualties were enormous, and amounted to about 10,000 Austrian soldiers dead and wounded. The Turkish Army arrived two days later, and found the town of Karansebes without defense. The Turkish Army took over the town easily soon after their arrival. Although many people attest that the battle really happened, some argue over its authenticity, due to the fact that no record of it was written until some 40 years later. Some argue that embarrassment may be the cause why no accounts of the incident were published until several decades later. Others say that the Austrian Army during that time was led by Austrian and German officers, while the infantrymen were composed of other European nation allies. In that regard, for some Austrians at least, if the battle fought was won, the victory was Austrian, but if they lost the battle, the blame was on the non-Austrian soldiers who had been forced into service.