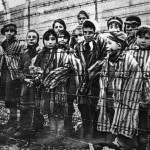 Many of the history books of today try to remove or minimize the Holocaust, and some people don’t even believe that it was real, but that couldn’t be further from the truth. The Holocaust took place between 1941 and 1945. In 1933, the Nazis came into power in Germany and they believed that the Germans were a superior race. They were completely against any people of different backgrounds…especially the Jewish people, who they felt were an inferior race, and were a danger to the German Racial Community. During the Holocaust, the Jewish people were systematicaly removed from their homes, made to be slaves, used for scientific experiments, and many died or were killed in the Gas Chambers.

On this day in 1942, a stunning 4,300 Jews are deported from the Polish town of Chelm to the Nazi extermination camp at Sobibor, where all are gassed to death. Between 1942 and 1943, there were about 250,000 Jewish prisoners who lost their lives in the five gas chambers housed there. Then in October 1943, a 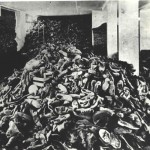 camp revolt occurred…300 Jewish slave laborers rose up and killed several members of the SS…Schutzstaffel (German translation: “Protective Echelon), as well as Ukrainian guards. The rebels were killed as the battled against the guards or tried to escape. The remaining prisoners were executed the very next day. I can’t even begin to imagine what incredible bravery it took to even make such an attempt. They had no weapons with which to engage in a battle. They were simply fighting for their lives, knowing that they would most likely lose. It was better to fight and die, than to live this way.

Also on this day, the German firm IG Farbe set up a factory just outside Aushwitz in order to take full advantage of the Jewish slave laborers from the Auschwitz concentration camps. IG Farben was a German chemical industry conglomerate. Its name is taken from Interessen-Gemeinschaft Farbenindustrie AktienGesellschaft which literally means “community of interests” of, in this case dye-making corporations. In addition to exploiting the Jewish slave labor for its oil and rubber production, IG Farben performed drug experiments on the slaves. Tens of 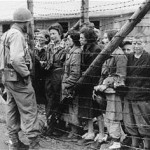 thousands of the slaves would lose their lives to the brutal work conditions and savage treatment received from the guards. In the aftermath, several of the firm’s officials would be convicted of plunder, spoilage of property, forced slave labor, and inhumane treatment of civilians and prisoners of war. The firm went under Allied control for the purpose of completely dismantling it, because it was a threat, but as resolve weakened, the firm was eventually divided into three companies, Hoechst…a chemical and pharmaceutical company, Bayer…a company we all know, and BASF…Badische Anilin und Soda Fabrik, also a chemical company. I suppose that one could say that in the end, some good came from these companies, but knowing their history tends to make it a little difficult to get past their origin, or their complete and total disregard for human life in the past.