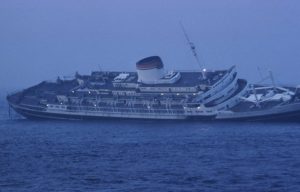 On a clear night, ocean travel is really safe, because ships can see each other easily. Fog, however, presents a much different situation. Nevertheless, radar should solve any problem that fog can cause…right? Theoretically, yes, it should, but on the night of July 25, 1856, something went horribly wrong with that whole system, and the authorities were very puzzled as to the cause. At 11:00pm on that Wednesday night, 45 miles south of Nantucket Island, Massachusetts…with a heavy Atlantic fog hanging in the air, two ships carrying 2,453 people were just ten minutes from disaster.

In the mid-1950s, travel by steamer between Europe and America was commonplace. More than 50 passenger liners regularly made the transatlantic ocean voyage. The Andrea Doria was one of the most lavishly adorned steamers. Put to sea in 1953, it was the pride of the Italian line. It was built for luxury, not speed, and boasted extensive safety precautions, such as state-of-the-art radar systems and 11 watertight compartments in its hull. The Swedish ocean liner Stockholm, went into service in 1948. It was a more modest ocean liner, less than half the tonnage and carrying 747 passengers and crew on that fateful night. The Andrea Doria, by contrast carried 1,706 passengers and crew that night.

On the night of July 25, 1956, the Stockholm was beginning its journey home to Sweden from New York, while the Andrea Doria was steaming toward New York. The Andrea Doria had been in an intermittent fog since midafternoon, but Captain Piero Calami, relying on his ship’s radar to get him to his destination safely and on schedule, only slightly reduced his speed. At the same time, the Stockholm was directed north of its recommended route by Captain H. Gunnar Nordenson, who was trying to reduce his travel time. In so doing, he risked encountering westbound vessels. The Stockholm also had radar and expected no difficulty in navigating past approaching vessels. Captain Nordenson failed to anticipate that a ship like the Andrea Doria could be hidden until the last few minutes by a fogbank.

At 10:45pm, the Stockholm showed up on the Andrea Doria’s radar screens, about 17 nautical miles away. Soon after, the Andrea Doria showed up on the Stockholm’s radar, about 12 miles away. What happened next has been disputed, but it’s likely that the crews of both ships misread their radar sets. Captain Calami made a dangerous decision to turn the Andrea Doria to port for an unconventional starboard-to-starboard passing, which he erroneously thought the Stockholm was attempting. About two miles away from each other, the ship’s lights came into view of each other. Third Officer Johan-Ernst Bogislaus Carstens, commanding the bridge of the Stockholm, then made a conventional turn to starboard. Less than a mile away, Captain Calami realized he was on a collision course with the Stockholm and turned hard to the left, hoping to race past the bow of the Stockholm. Both ships were too large and moving too fast to make a quick turn. At 11:10pm, the Stockholm‘s sharply angled bow, reinforced for breaking ice, smashed 30 feet into the starboard side of the Andrea Doria. For a moment, the smaller ship was lodged there like a cork in a bottle. Then, the opposite momentum of the two ships pulled them apart, and the Stockholm‘s smashed bow screeched down the side of the Doria, sending sparks into the air.

Five crewmen of the Stockholm were killed in the collision. The Andrea Doria fared far worse. The bow of the Stockholm crashed through passenger cabins, and 46 passengers and crew were killed. One man watched as his wife was dragged away forever by the retreating bow of the Stockholm. Fourteen year old Linda Morgan was asleep on the Andrea Doria when the impact somehow threw her out of bed and onto the Stockholm’s crushed bow. She was later dubbed “the miracle girl” by the press. With seven of its 10 decks ripped open and exposed to the Atlantic waters, the Andrea Doria listed more than 20 degrees to port in minutes, and its watertight compartments were compromised. A lifeboat evacuation began on the doomed ship, but went far from smoothly. The port side could not be used because the ship was listing too much, which left lifeboat seats for 1,044 of the 1,706 people on board. Passengers in the lower cabins fought their way through darkened hallways quickly filling with ocean water and leaking oil. The first lifeboat was finally deployed an hour after the collision, and held more crew than passengers. Because the Stockholm had suffered a nonfatal 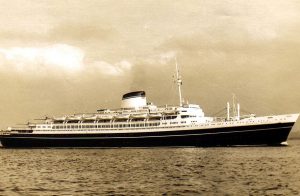 blow, it was able to lend its lifeboats to the evacuation effort. Several ships heard the Doria’s mayday and came to assist. At 2:00am on July 26, the Ile de France, another great ocean liner, arrived and took charge of the rescue effort. It was the greatest civilian maritime rescue in history, and 1,660 lives were saved. The Stockholm limped back to New York, damaged but afloat. At 10:09am on July 26, the Andrea Doria sank into the Atlantic. Almost immediately, the wreck, which is located at a depth of 240 feet of water, became a popular scuba diving destination. However, the Andrea Doria is known as the “Mount Everest” of diving locations, because of the extreme depth, the presence of sharks, and unpredictable currents.