Shoes On The Danube Banks 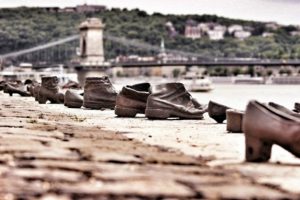 While looking at some historic photos, I came across one that was both intriguing, and sad. The title of the photograph was as intriguing as the photograph itself. Shoes on the Danube Banksdepicts a memorial in Budapest, Hungary that was conceived by film director Can Togay. The memorial sits on the east and of the Danube River. Togay worked with sculptor Gyula Pauer to create a memorial to honor the Jews who were killed by fascist Arrow Cross militiamen in Budapest during World War II.

As I looked at the picture of many pairs of shoes, the magnitude of what had happened there, and exactly what I was looking at hit me. These shoes were not just shoes, they were people…innocent people, who lined up and shot for no other reason than that they were Jewish. These people were told to remove their shoes, and then they were shot. Their lifeless bodies fell into the river and were swept downstream. There was no funeral, no burial…despite the traditions that are set up for Jewish burial. Of course, I know that not every Jewish death can be handles in the Jewish traditions, but these people were murdered in such a way as to humiliate them, including the lack of a traditional burial.

The monument along the Danube River represents the lives of the people who were murdered, there is no way to really represent the people, because no one knows who they were, what they looked like, or even how many there were for sure, but rather the monument depicts their shoes left behind on the bank. It is the only real connection we can have to these victims of such horrible hatred. The brutal treatment of the approximately 3,500 people, 800 of them Jews, and the rest accused of Jewish activities, is beyond horrid. These people were forced to strip naked on the banks of the Danube and face the river. Then, a firing squad shot the prisoners at close range in the back so that they fell into the river to be washed away. 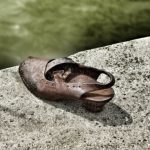 The monument is located on the Pest side of the Danube Promenade in line with where Zoltan Street would meet the Danube if it continued that far, about 980 feet south of the Hungarian Parliament and near the Hungarian Academy of Sciences…between Roosevelt Square and Kossuth square. The sculptor created sixty pairs of period-appropriate shoes out of iron. The shoes are attached to the stone embankment, and behind them lies a 131 foot long, 27 inch high stone bench. At three points are cast iron signs, with the following text in Hungarian, English, and Hebrew: “To the memory of the victims shot into the Danube by Arrow Cross militiamen in 1944–45. Erected 16 April 2005.”

Most of the murders along the edge of the River Danube took place around December 1944 and January 1945, when the members of the Arrow Cross Party police (“Nyilas”) took as many as 20,000 Jews from the newly established Budapest ghetto and executed them along the river bank. There were, of course, some survivors who managed to make it out, and lived to tell their stories. On of those Was Tommy Dick, who wrote the book, “Getting Out Alive.” I have not read the book yet, but after seeing this memorial, I will be reading it very soon.

There were heroes in Budapest too. Valdemar Langlet, head of the Swedish Red Cross in Budapest, with his wife Nina, and later the diplomat Raoul Wallenberg and 250 coworkers were working around the clock to save the Jewish population from being sent to Nazi concentration camps. This group later grew in number to approximately 400. Lars and Edith Ernster, Jacob Steiner, and many others were housed at the Swedish Embassy in Budapest and 32 other buildings throughout the city which Wallenberg had rented and declared as extraterritorially Swedish to try to safeguard the residents. Italian Giorgio Perlasca did the same, sheltering Jews in the Spanish Embassy.

On the night of January 8, 1945, an Arrow Cross execution brigade forced all the inhabitants of the building on 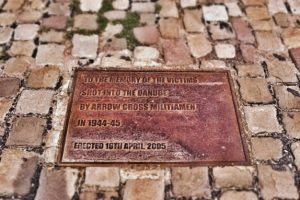 Vadasz Street to the banks of the Danube. At midnight, Karoly Szabo and 20 policemen with drawn bayonets broke into the Arrow Cross house and rescued everyone. Among those saved were Lars Ernster, who fled to Sweden and became a member of the board of the Nobel Foundation from 1977 to 1988, and Jacob Steiner, who fled to Israel and became a professor at the Hebrew University of Jerusalem. Steiner’s father had been shot dead by Arrow Cross militiamen 25 December 1944, and fell into the Danube. His father had been an officer in World War I and spent four years as a prisoner of war in Russia. These were horrific murders, and after looking at the pictures of this memorial and reading about the horrible murders, my mind cannot unsee the images it has conjured up of this atrocity.