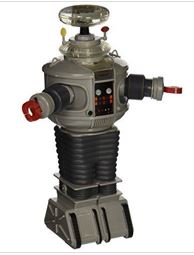 When we think of diving suits, most of us think of the modern day neoprene wet suit, but the diving suits of the past were very different. Of course, the suits that allow divers to go deeper are much different that the more shallow-diving wet suit, but they are still vastly different that the original types of deep-diving suits that were used earlier. One of those earlier suits…the suit designed by Chester E. Macduffee looks like something out of an old movie. In fact, it reminds me of the robot on the 1965 Lost in Space series. Macduffee was an obscure inventor, who patented 4 inventions, and then disappeared from public view. There is very little information out there about him. Nevertheless, I find his 250 Kilo diving suit to be very interesting. 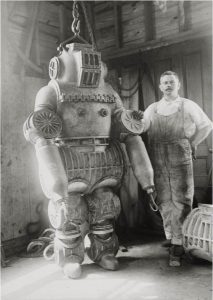 Macduffee’s Armored Diving Suit was tested in 1915 in Long Island Sound. It was made from aluminum alloy and weighed about 250 kilo, which is 551 pounds. The cylindrical joints were mounted on ball bearings to allow movement, but in one direction only. They were not watertight, so Macduffee put a waterpump into the suit. This pump was able to pump water from the leg section into the sea. The pump operated on compressed air supplied from the surface. The used air from the pump then expanded into the suit and was used by the diver for breathing. The pump was driven by electricity…another factor that would make me nervous. The idea of mixing water and electricity to that degree would make me extremely nervous. The suit was equipped with a 12 section-gripper mounted on 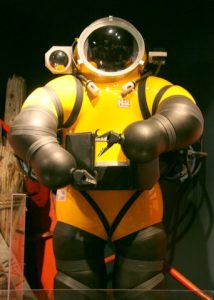 one arm and a electric light on the other arm. as well as a hook on one arm. Macduffee’s suit reached 65 meters, or 213 feet, of waterdepth in 1915! Pretty amazing distance for that era. The current diving suits reach distances of about 2,000 feet, making the Macduffee suit a shallow water suit, in reality.

The diver got in the suit, and then the suit was lowered down by way of a cable. I wonder what the first diver thought of all that. Testing the suit must have been a little bit scary, because of course, they didn’t fully know how the suit would do in the deep water. I’m sure it occurred to them that they could be crushed. One thing is for sure, if a shark bit him, I think the shark would be the one who was surprised, especially when some of their teeth came out. Modern-day deep diving suits don’t look all that different when you think about it, but they are much easier to use.