an affair of honor

An Affair Of Honor 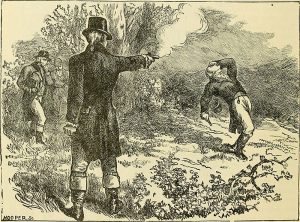 In early American history, a duel…then called an Affair of Honor were a legal way to settle disputes between parties. Most of these duels were settled amicably before the duel ever too place, still, some went the way of the full-blown duel. I can understand why the parties would try to work it out amicably, because you really never knew who was going to win in a duel, and you had to decide if this dispute was worth your life.

One of the most famous duels in American history, was between Vice President Aaron Burr and his long-time political antagonist, Alexander Hamilton, who was born on the Caribbean island of Nevis in either 1755 or 1757 (the exact date is under dispute). Hamilton was a poor immigrant, while Burr was born into a wealthy New Jersey family in 1756. Both were highly intelligent and became capable politicians…but had opposing views and were part of different political parties. Hamilton thought Burr was a politically dangerous man, and was quick to point out his views on the matter.

As you can imagine, Hamilton’s statements against Burr did not create a friendship between the two. Burr became vice-president to Thomas Jefferson in 1800, but his political views quickly caused the two men to grow apart politically. Jefferson did not support Burr’s re-nomination to a second term, in 1804. In the campaign, Burr’s character was savagely attacked by Hamilton and others, and after the election Burr vowed to restore his reputation by challenging Hamilton to a duel…an “affair of honor.” 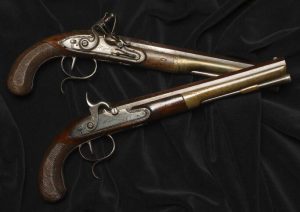 As “affairs of honor” go, most were solved without gunfire, in fact, the outspoken Hamilton had been involved in several affairs of honor in his life, and he had resolved most of them peaceably. That was not to be the case here. The hatred between the two men went too deep, and there was no such willingness to resolve the matter easily. So, on July 11, 1804, the enemies met at 7am at the dueling grounds near Weehawken, New Jersey. Ironically, it was the same spot where Hamilton’s son had died defending his father’s honor in 1801. As these matters go, the events that followed were told in conflicting accounts. According to Hamilton’s “second,” (his assistant and witness in the duel), Hamilton decided the duel was morally wrong and fired into the air. Burr’s “second” claimed that Hamilton fired at Burr and missed. The seconds agreed on the next events. Burr shot Hamilton in the stomach. The bullet lodged next to his spine. He was taken back to New York. He died the next day.

The nation was outraged by the killing of a man as respected as Alexander Hamilton. Burr, who was still vice president at the time, was charged with murder. Nevertheless, he returned to Washington DC, where he finished his term immune from prosecution. In 1805, Burr, thoroughly discredited, concocted a plot with James Wilkinson, commander of the US Army, to seize the Louisiana Territory and establish an independent empire, which Burr would lead. He contacted the British government and unsuccessfully pleaded for assistance in the scheme. Later, when border trouble with Spanish Mexico heated up, Burr and Wilkinson 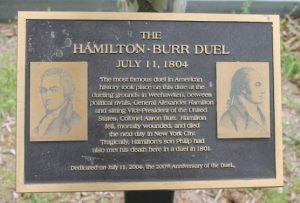 conspired to seize territory in Spanish America for the same purpose.

In the fall of 1806, Burr led a group of well-armed colonists toward New Orleans, prompting an immediate US investigation. General Wilkinson, in an effort to save himself, turned against Burr and sent dispatches to Washington accusing Burr of treason, or maybe insanity. In February 1807, Burr was arrested in Louisiana for treason and sent to Virginia to be tried in a US court. He was acquitted on a technicality in September. Still, public opinion called him as a traitor, and he fled to Europe. He later returned to private life in New York, the murder charges against him somehow forgotten. He died in 1836.