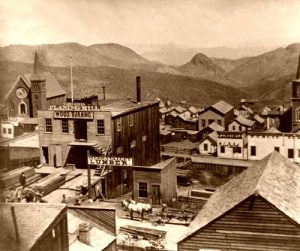 Gold brought miners from the east to multiple areas of the American west…all looking to make their fortune in the gold fields. Unfortunately, it wasn’t just gold and silver miners who flooded Nevada, or any other gold rush area, in the late 1800s in search of their fortunes. The West was indeed wild, and it and the gold also attracted plenty of outlaws and bandits, looking to make their fortune too, but not willing to do the work to mine the gold. Nevada, like other states of the Wild West, attracted its share of outlaws and bandits. One such man, named Andrew Jackson “Jack” Davis, led a gang of thieves involved in robbing stage stops, bullion wagons, and trains in Western Nevada.

Davis first arrived in the area in 1859. His plan was to lead two different lives, 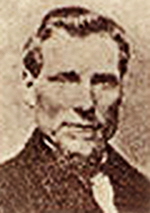 and he carried it out quite well. To the outside world he looked like a legitimate business man when he set up a livery stable in Gold Hill. However, in his “spare” time, Davis and his gang took to the bandit road, taking gold and bullion from any source they could find. Davis built a small bullion mill in Six Mile Canyon east of Virginia City, Nevada. There, he melted down his stolen gold, selling it as legitimate gold bars. He then buried his proceeds so people would not notice or catch on to how wealthy he really was, because after all, how rich could a livery stable owner be.

On November 4, 1870 the gang robbed the express car of the Central Pacific Railroad near Verdi, Nevada taking some $40,000 in gold coins and bullion. Pursued by lawmen, they were said to have buried the stolen cache along the north bank of the Truckee River, between Reno and Laughton’s Hot Springs west of town, near the site of the long-abandoned River Inn. The entire gang was apprehended and all were sent to the Nevada State Prison, but would not tell where they had hidden their stolen loot. In 1875, Davis was paroled but two 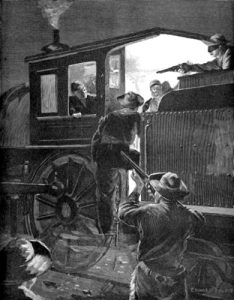 years later, he was shot in the back during a Wells Fargo stagecoach robbery near Warm Springs, Nevada. If Davis ever returned for his cache is unknown, but many believe it is still hidden in Six-Mile Canyon or in the vicinity of the Truckee River. Treasure hunters have long searched these two locations without success. If the money is still there, it may never be found.

Another legend abounds that the ghost of Jack Davis protects his treasure in the canyon. Many who have looked for the treasure have been frightened away by the white screaming phantom that is said to sometimes sprout wings and rise into the air. I suppose some would say I shouldn’t be so skeptical, but since I don’t believe in ghosts, my guess is that people just get freaked out, and their imagination runs away with them. Nevertheless, those who think they have seen what they believe to be a ghost, would not be persuaded by my disbelief in same.