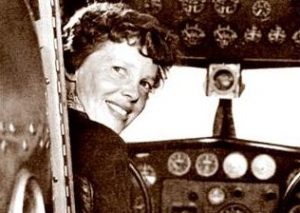 Recently, I discovered that Amelia Earhart is my 8th cousin once removed on my dad, Allen Spencer’s side of my family. Prior to this time, I knew of Amelia and her accomplishments, as well as her disappearance, but other than the fact that the whole thing was sad, it really didn’t affect me very much. Maybe it’s the fact that I now know that she is a relative, or maybe it’s the fact that the whole plot of the mystery seems to have thickened with some new information. Either way, I find myself intrigued by this new information.

Amelia Earhart vanished eighty years ago. She was last heard from on July 2, 1937. It was assumed that her plane had crashed during an attempt to become the first woman to circumnavigate the globe, and since she was never heard from again, most people, myself included, were sure that she had crashed. For eighty years, it was pretty much settled…until someone looked at a photograph in a long forgotten file, that suggests that she may not have crashed, but rather crash landed in the Marshall Islands, and was possibly taken prisoner, along with her navigator. The photo, found in a long-forgotten file in the National Archives, shows a woman who resembles Earhart and a man who appears to be her navigator, Fred Noonan, on a dock. The discovery is featured in a new History channel special, “Amelia Earhart: The Lost Evidence.”

The photograph suggests that Amelia Earhart, survived a crash landing in the Marshall Islands. I’m sure there are many people who doubt the authenticity of the photograph, but independent analysts told the History Channel that the photo appears legitimate and undoctored. Shawn Henry, former executive assistant director for the FBI and an NBC News analyst, has studied the photo and feels confident it shows the famed pilot and her navigator. Henry told NBC news, “When you pull out, and when you see the analysis that’s been done, I think it leaves no doubt to the viewers that that’s Amelia Earhart and Fred Noonan.”

These days, with so much fake news, and so much speculation about things, it’s hard to believe things sometimes. Still, so much of this evidence seems to point to facts very different from the theories we have 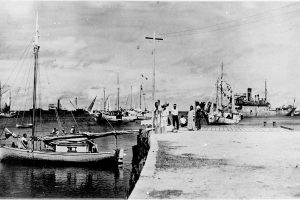 believed to be truth for so long. We know that Earhart was last heard from on July 2, 1937, as she made her quest to become the first woman pilot to circumnavigate the globe. She was declared dead two years later after the United States concluded she had crashed somewhere in the Pacific Ocean, but her remains were never found. Now, these investigators believe they have found evidence that Earhart and Noonan were blown off course, but survived the ordeal. The investigative team behind the History channel special believes the photo may have been taken by some secret spy for the United States on Japanese military activity in the Pacific. It is not clear how Earhart and Noonan could have flown so far off course.

Les Kinney, a retired government investigator has spent 15 years looking for Earhart clues, about what really happened to her. He said the photo “clearly indicates that Earhart was captured by the Japanese.” Japanese authorities told NBC News they have no record of Earhart being in their custody, but then it is doubtful that they would have been honest with us if they had her. The photo, marked “Jaluit Atoll” and believed to have been taken in 1937, shows a short-haired woman, believed to be Earhart, sitting on a dock with her back to the camera. Like Earhart, the woman was wearing pants, something for which Earhart was known, even though it was odd in those days. Near her is a standing man who looks like Noonan, so much so that when a transparent photo of him fits it perfectly…down to the hairline. “The hairline is the most distinctive characteristic,” said Ken Gibson, a facial recognition expert who studied the image. “It’s a very sharp receding hairline. The nose is very prominent.” Gibson added, “It’s my feeling that this is very convincing evidence that this is probably Noonan.” The photo also shows a Japanese ship, Koshu, towing a barge with something that appears to be 38 feet long airplane…the same length as Earhart’s plane. The locals have continued to claim that they saw Earhart’s plane crash before she and Noonan were taken away. Native school kids insisted they saw Earhart in captivity. The story was even documented in postage stamps issued in the 1980s. “We believe that the Koshu took her to Saipan, in the [Mariana Islands], and that she died there under the custody of the 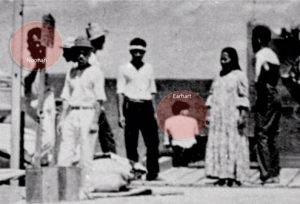 Japanese,” said Gary Tarpinian, the executive producer of the History special. “We don’t know how she died,” Tarpinian said. “We don’t know when.” Josephine Blanco Akiyama, who lived on Saipan as a child, has long claimed she saw Earhart in Japanese custody. “I didn’t even know it was a woman, I thought it was a man,” said Akiyama. “Everybody was talking about her — they were talking about in Japanese. That’s why I know that she’s a woman. They were talking about a woman flyer.” It is not clear if the United States government knew who was in the photo, or if it was taken by a spy, the United States may not have wanted to compromise that person by revealing the image. If that were the case, sadly two lives were sacrificed for one. 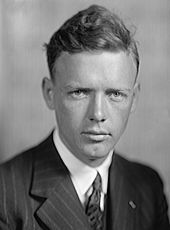