There is a time each year, when the kids are getting ready to head back to school. It is a different date for different places, and in most cases, the parents are pretty happy to have their kids back in the school routine. Some of the kids are happy about it too. I suppose it feels different when the kids are going to school in the town where they live, because they aren’t headed so far away that you won’t see them in the evening.

However, when they are off to college in another town, even if it is in the same state, there is a sense of lonliness that comes over parents, and grandparents who are used to seeing them often. That is how I am feeling today, because tomorrow, my oldest grandchild, Chris Petersen heads back to Sheridan to go to college for his second and final year. Yes, Sheridan isn’t that far from Casper, but this year, because he has a job and a Friday night class, he will only be home a few times, whereas last year, he came home most weekends, because he had a job here.

Just knowing that he will be staying in Sheridan most of the school year feels like he has moved as far away as my daughter Amy Royce, her husband Travis, and son, Caalab, who live in the Seattle area now. I have never been one to like change, and while I know that it is a part of life, I still find myself wishing that things would just stay the way they were. I know that for Chris’ parents, my daughter, Corrie Petersen, her husband, Kevin, and son Josh, tomorrow will be a very lonely day, as they drop Chris off at his dorm room, and head back home without him. They are such a close family, and this is just hard.

Nevertheless, as the new school year begins, they will have to face the facts that Chris is away again. It would be lovely we could all just teleport around the country. That way it wouldn’t matter where anyone lived, because we could see each other as often as we wanted. Since that is not to be, I guess we will all have to get used to the idea that for another school year, at least, Chris will be living in Sheridan and we will be here. I know that for his family…and for him it is going to feel like a long year. 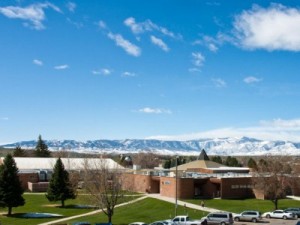 Chris, I know this year will be a great one for you. It will be hard, but it is the culmination of all your hopes and dreams. You make us all so proud as you persue your dream of being the owner of a restaurant of your own someday. You are an amazing chef, and I know that you will be very successful in your future endeavours. So Chris, while we will miss you very much, I know that it is time for you to get back to work now. I know it will be an amazing year for you. Enjoy all of it, because before you know it, your college days will be over, and you will be in the working world like the rest of us. We love you very much.