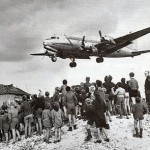 I think that every nation has opportunities to do what can be labeled as defining moments…situations when the nation dealt with an enemy or situation so well, that it can only be considered amazing. That was how the United States reacted to one of the most dramatic standoffs in the history of the Cold War. The Soviet Union decided to block off all road and rail traffic to and from West Berlin, Germany. The move was designed to basically starve the people into submission…or at least that was the plan. It was also a move that would be in defiance to all the other allies in Germany at the time. Unfortunately for the Soviet Union, the blockade turned out to be a horrible diplomatic move, but for the United States, it became a defining moment. The United States emerged from the confrontation with a renewed purpose and confidence, as well as a reputation for being a humanitarian nation.

When World War II ended, Germany was divided into occupation zones. The United States, Great Britain, the Soviet Union, and eventually France were granted specific zones to occupy. Each nation was there to accept the surrender of Nazi forces and restore order. The Soviet Union occupied most of eastern Germany, and the other 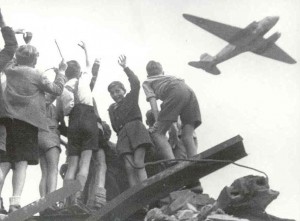 Allied nations occupied western Germany. The German capital of Berlin was divided into four sections as well. The differences between the United States and the Soviet Union were immediately evident. The Soviets were intent on thoroughly breaking the Germans…making them neutral and disarmed. Punishment was going to be at the top of the list. The United States saw things differently. They believed that the economic recovery of Western Europe depended of a strong, reunified Germany. The United States also felt that a rearmed Germany was going to be a stiff deterrent to further Soviet expansion into Western Europe. In May 1946, the Americans stopped reparations shipments from their zone to the Soviets. In December, the British and Americans combined their zones; the French joined some months later. The Soviets viewed these actions as a threat and issued more demands for more say in the economic future of Germany. On June 22, 1948, negotiations between the Soviets, Americans, and British broke down. On June 24, Soviet forces blocked the roads and railroad lines into West Berlin.

When the Soviets blocked the roads and railways, the Americans were furious. The question now became, what to do about it. Inside West Berlin there was panic. The people thought they were going to die. For a few tense 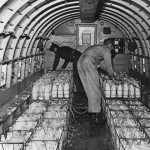 days, the world waited to see what the United States would do next. Then, just two days after the Soviets began the blockade, the United States reacted in a way that was so unexpected, and in the end, it would be a way that brought about that defining moment, and really set the stage for the humanitarian reputation the United States has today. A massive airlift of supplies was sent into West Berlin in what would become one of the greatest logistical efforts in history. For the Soviets, the escapade quickly became a diplomatic embarrassment. They looked like an international bully that was trying to starve men, women, and children into submission. The successful American airlift merely served to accentuate the technological superiority of the United States over the Soviet Union. On May 12, 1949, the Soviets officially ended the blockade.