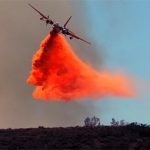 The Vietnam war was many things, but I don’t think anyone really expected Operation Ranch Hand…at least not the general public. Who would have expected such a heinous act to be carried out by the government. Operation Ranch Hand was a United States military operation during the Vietnam War, lasting from 1962 until 1971. The operation was largely inspired by the British use of 2,4,5-T and 2,4-D (Agent Orange) during the Malayan Emergency in the 1950s. It was part of the overall program during the war called “Operation Trail Dust.” Ranch Hand involved spraying an estimated 20 million United States gallons of defoliants and herbicides over rural areas of South Vietnam in an attempt to deprive the Viet Cong of food and vegetation cover. Nearly 20,000 sorties were flown between 1961 and 1971.

It’s hard to say if the government knew the consequences of the chemicals that were used. It’s possible that the chemicals were thought to just kill vegetation, and not to hurt people. The people involved were known as 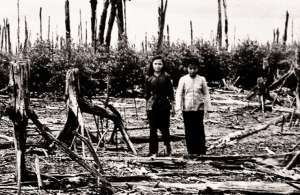 Ranch Handers. I seriously doubt that at some point they didn’t wonder if what they were doing could possibly be harmful to the people they were spraying it on or near. Nevertheless, the “Ranch Handers” had a motto, “Only you can prevent a forest.” It was a take on the popular United States Forest Service poster slogan of Smokey Bear. During the ten years of spraying, over 5 million acres of forest and 500,000 acres of crops were heavily damaged or destroyed. Around 20% of the forests of South Vietnam were sprayed at least once.

The herbicides were sprayed by the United States Air Force flying C-123s using the call sign “Hades.” The planes were fitted with specially developed spray tanks with a capacity of 1,000 United States gallons of herbicides. A plane sprayed a swath of land that was ½ mile wide and 10 miles long in about 4½ minutes, at a rate of about 3 United States gallons per acre. Sorties usually consisted of three to five airplanes flying side by 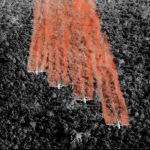 side, and 95% of the herbicides and defoliants used in the war were sprayed by the United States Air Force as part of Operation Ranch Hand. The remaining 5% were sprayed by the United States Chemical Corps, other military branches, and the Republic of Vietnam using hand sprayers, spray trucks, helicopters and boats, primarily around United States military installations…meaning that the majority of the chemicals were exposed to the Untied States Military. Many of the Vietnam veterans have felt betrayed by their own government. Many have felt that the government was well aware of the dangers of the chemicals they were spraying. I don’t know if they knew or not, but it seems like they should have suspected something. Years later, the effects of Agent Orange are well known and it was vicious.