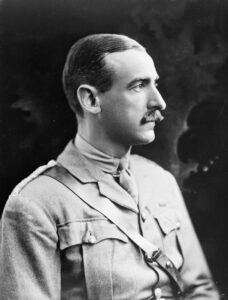 The unkillable soldier…a nickname that has deep ramifications, and a nickname no one really wants to have. It indicates that the soldier is wounded multiple times…and somehow survived. General Adrian Carton de Wiart was that soldier. He was born into an aristocratic family in Brussels, on May 5, 1880. He was the eldest son of Léon Constant Ghislain Carton de Wiart and Ernestine Wenzig. He spent his early days in Belgium and in England. When he was six years old, his parents divorced, and he moved with his father to Cairo. His mother remarried Demosthenes Gregory Cuppa later in 1886. His father was a lawyer and magistrate, as well as a director of the Cairo Electric Railways and Heliopolis Oases Company and was well connected in Egyptian governmental circles. Adrian Carton de Wiart learned to speak Arabic. He joined the British Army at the time of the Second Boer War around 1899, where he entered under the false name of “Trooper Carton,” claiming to be 25 years old, but he was actually 20. He was wounded in the stomach and groin in South Africa early in the Second Boer War and was sent home to recuperate. His father was furious when he learned his son had abandoned his studies. Nevertheless, he allowed his son to remain in the army. 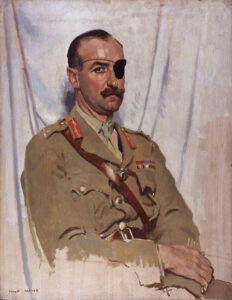 Babenhausen and Princess Eleonora zu Hohenlohe-Bartenstein und Jagstberg of Klagenfurt, Austria. They had two daughters, the elder of whom Anita (born 1909, now deceased) was the maternal grandmother of the war correspondent Anthony Loyd (born 1966). I wonder if Loyd was inspired by his grandfather’s story.

Over the course of his career, General Adrian Carton de Wiart earned the nickname “the unkillable soldier.” By 1915, he was promoted to captain and had already survived his first war…the Boer War. One night, near the French battlefield of Ypres, he and a small group of officers wandered too far into enemy territory and ran into a group of German soldiers, who fired. De Wiart was badly shot in the hand but scrambled back to his regiment. According to his memoirs, he used a “scarf he’d taken off a slain German soldier to stop the bleeding.” He was taken to a hospital where surgeons debated what to do about the gory mess of dangling fingers that had been his hand. De Wiart said, “I asked the doctor to take my fingers off; he refused, so I pulled them off myself and felt absolutely no pain in doing it.” De Wairt’s injuries were not over yet. The hand became infected and later had to be amputated. Three weeks later, De Wiart and returned to duty. He was shot several more times in his career, survived two plane crashes, and lost an eye. Over the course of four conflicts, 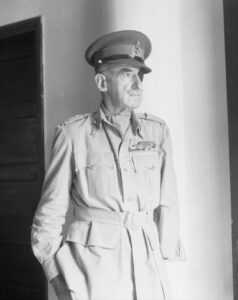 he sustained 11 grievous injuries, and simply could not be killed in war.

En route home via French Indochina, Carton de Wiart stopped in Rangoon as a guest of the army commander. Coming down the stairs, he slipped on coconut matting, fell down, broke several vertebrae, and knocked himself unconscious. He was admitted to Rangoon Hospital where he was treated and recovered. His wife died in 1949. Then, in 1951, at the age of 71, he married Ruth Myrtle Muriel Joan McKechnie, a divorcee known as Joan Sutherland, 23 years his junior (born in late 1903, she died January 13, 2006, at the age of 102.) They settled at Aghinagh House, Killinardrish, County Cork, Ireland. Carton de Wiart died at the age of 83 on June 5, 1963. He left no papers. He and his wife Joan are buried in Caum Churchyard just off the main Macroom road. The grave site is just outside the actual graveyard wall on the grounds of his own home.