Saviour Of The Union

Probably my favorite historical President, would have to be Abraham Lincoln. Even in elementary school, I found his political acts to be most interesting. Of course, my favorite speech would have to be the Gettysburg Address. Every time I hear that speech, I get Goosebumps. I’m sure I’m not alone in that either. That was such a moving speech. It was at a time when our nation was severely divided, and on the brink of splitting in two. No one could agree on what we should be like. And yet, I believe that Lincoln made the right call. Owning slaves was wrong, and if it took a war to free them, then that was the way it would have to be. I am also glad that our nation did not divide, as I think we are a great nation because of our strongly united stance.

Apparently, our nation agrees with me on just how great Abraham Lincoln was too, because on this day…his birthday…in 1914, the first stones were laid for the Lincoln Memorial. I doubt that the connection was lost to those who 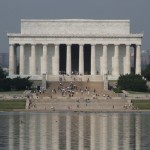 were doing the work on the splendid memorial, and maybe the work had officially been planned for that day for that very reason. Lincoln was known as the “Saviour of the Union” because of his actions to keep our nation together. The inscription reads, “In this temple, as in the hearts of the people for whom he saved the Union, the memory of Abraham Lincoln is enshrined forever.” And beneath these words, the 16th President of the United States sits immortalized in marble as an enduring symbol of unity, strength, and wisdom. I have to wonder if Lincoln would have been embarrassed or humbled by such a display. I’m sure he would be humbled, but I also think that because Lincoln was such a humble man, he would have also been a bit embarrassed.

Abraham Lincoln came from humble beginnings. He was raised in what was then the western frontier in Kentucky and Indiana. He was mostly self educated, and became a lawyer in Illinois. He was a member of the 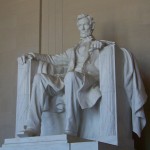 Whig Party, which is now gone, and then became a member of the Republican Party in 1854. He hated slavery and spoke out against it many times. He didn’t have much support in the South, of course, but he swept the Northern states and became president in 1860. He also reached out to the War Democrats, those who supported the war. He also confronted the Republicans who wanted to punish the South after the war, and called for more compromise with the anti-war Democrats who hated him…trying to bring peace within the government even before the war ended. Nevertheless, just six days after Robert E Lee surrendered, President Abraham Lincoln was assassinated by John Wilkes Booth, who was a Confederate sympathizer. Today, we remember Abraham Lincoln on the 206th anniversary of his birth.