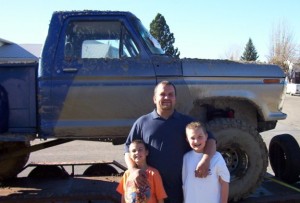 I’m not really sure what the draw is, to getting down and dirty, but there are certainly a lot of people who like to take part in the muddy things of life…like mud trucks, mud wrestling, and muddy 4-wheeling. Maybe it is just the uninhibited, totally down and dirty experience they like, and maybe once you try it, it becomes easy to get hooked on, but I simply can’t imagine it. There are, however, several people in my family, and possibly lots more that I don’t know about, who really love to get in the mud and get dirty.

My son-in-law, Kevin Petersen and my grandsons, Chris and Josh Petersen, loved it when he had a mud truck. They would enter it in the local and even some in other areas of the state, mud truck competitions. The idea here, as you probably know, is to try to drive your truck as far through a mucky mud hole as you can. Obviously, the truck that goes the furthest is deemed the winner. Kevin loved doing that. Winning the competition here isn’t the whole idea, although it is a big part. Nevertheless, even if he didn’t win, he had a great muddy time trying. You see…to me that simply meant having to bring your truck home and wash all that mud off again, but that didn’t matter to Kevin. It was all about the mud and getting down and dirty. If your truck wasn’t covered in mud when you were done, you didn’t try hard enough. 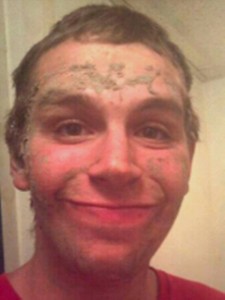 For some like my grand nephew, Brian Kountz, it was all about 4-wheeling. If there was a mud puddle in his way, he didn’t go around it, although when 4-wheeling, he could have. No, he had to go through it, and if he got stuck, then it was time to get out and dig through the mud in an effort the free the very stuck truck. Brian never backed down from that battle. It was man against mud, and while the mud often won, it was not for a lack of fighting it on Brian’s part. That is probably why his Bronco didn’t really stand a chance in life. Broncos were made for 4-wheeling and mudding, as far as Brian was concerned, and that was how he intended to use his. My husband, Bob used to say, “That kid is gonna kill that Bronco someday.” And Brian did, in the end, but he had an awesome time doing so.

As for my Uncle Bill Spencer…well, who needed a car or truck to get down and dirty? One time during World War II, he and some friends were taking a break from the shipyard war work they did, to go on a picnic and do a little swimming. Needless to say, that picnic turned into a mud fight…boys and girls too. No one was safe in that battle either. If the girls thought they weren’t going to be pulled into the mud, they were real wrong. Uncle Bill says that by the time they were done, they were covered in black, slimy mud from head to toe. He wanted to get a picture of everyone, but most of them decided that they didn’t really want to save that moment, only to be haunted by their childishness every time those pictures were brought out. Uncle Bill didn’t care. The rest washed off, and got in the picture with a muddy Uncle Bill, so he could at least document the players. 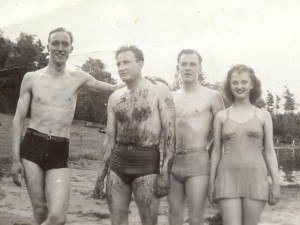 I guess getting down and dirty isn’t such an odd thing to do. In reality, everyone needs a good way to de-stress sometimes, and something as unconventional as a mud fight or even a food fight might just do the trick…provided I don’t have to clean it up. For many people, it is a way of letting off steam, and doing something that is totally hilarious and even a little crazy. To those people, I say “more power to ya.” I’m not sure I would ever like dong that, but then I haven’t done everything in life yet, so…who knows, maybe I’d like it too. Time will tell, I guess. 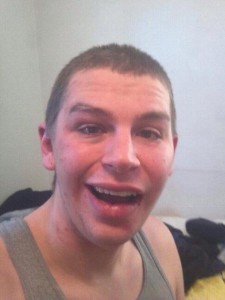 When a young life ends, there are always far more questions than answers. It is simply incomprehensible to think that the son, dad, brother, and grandson that you thought would always be around, is suddenly gone. When we found out yesterday, that Bob’s first cousin once removed, Brian Scott Kountz passed away at 9:45 pm on June 21, 2014, it was such a hard day. Brian was Bob’s cousin, Sandi Kountz’ oldest son, and he had a brother, Kyler Avey and a sister, Destreyia Cannon. He was the first grandchild of Bob’s aunt, Margee Kountz. He will also be missed by his uncle, Dan Kountz and cousins, Zech and Stasi Kountz, and extended family and friends.

When someone passes away, it seems like the memories that lived only in your memory files, start coming to the surface. Memories like the ones Stasi has of how Brian lit up a room by simply walking into it. He had a great laugh, and he touched the hearts of all who knew him. One of the favorite memories Stasi has of Brian is watching “Fresh Prince Of Bel-Air” and eating Mac and Cheese together. It isn’t necessarily the major life events that hold a special place in our 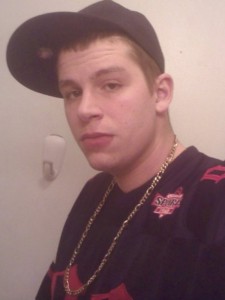 hearts, but rather the moments that seem to stay with us forever, after losing a loved one.

I think a lot of us will remember Brian for his old cars. He always seemed to have a car that was like a big clunky boat. And that was just fine with him. He might have a rusty Cadillac or an old Blazer, but he didn’t care. He loved those old cars, and as a young man of only 24 years of age, maybe they were also what he could afford. He had a tendency to go 4 wheeling with his SUV, and that was probably not the best thing for the car, but like all kids, there were priorities…and then there were priorities, and adventure was simply a priority. Mechanics and cars were of great interest to Brian. He was taking mechanics classes at the time of his death, and his future plan was to open his own shop. He was happy. His life was taking shape and before long, he would be a successful businessman.

Even though he was like all kids in the things that he liked to do, his family was the top priority in his mind. Brian took being the oldest child very seriously. He was a good big brother, who would give the shirt off his back for his brother and sister. He was especially 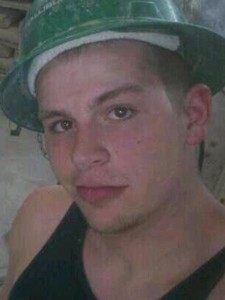 close to his little sister, Destreyia, which is typical of lots of big brothers. I’m sure they had their moments when they fought like cats and dogs, but when it came to anyone else picking on his little sister…look out, because he would do whatever it took to protect her. There were so many things that bonded them together. Brian was her rock, and she was his sunshine. For Brian’s mom, Sandi, he was her first born, and like all moms, each child has their special characteristics. Each one holds a special place in their heart. Sandi has always seen the potential that Brian had, and she was his biggest cheerleader. She encouraged him to take the mechanics classes, and she knew that he would be a big success when his training was over. The hardest thing about today is knowing that all Brian’s plans and dreams are over now…his future no longer exists. Rest in peace Brian. We love and miss you already.