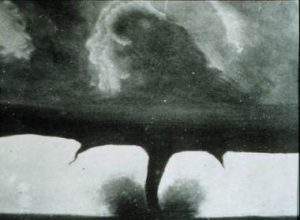 These days, tornado watches and warnings are a normal part of life. They may not happen every day, but when they do sound, we know what to do to stay as safe as possible. The warnings don’t always mean that there are zero deaths from a tornado, but they do help. Unfortunately, the tornado warning sirens, Doppler radar, and television warnings did not exist in 1884. In those days, people had to rely on the skies to tell them what was coming, and as most of us know, that is not always an easy task. In fact, it has taken hundreds of years to even begin to come close to perfecting a system whereby the public could be warned of approaching severe weather, and even then, it hasn’t eliminated the deaths that can occur from these storms.

One of the largest and most widespread tornado outbreaks in American history happened at a time when warnings did not exist. It happened on this day February 19, 1884, and into February 20, 1884. The precise number of tornadoes, as well as fatalities incurred during the outbreak remains unknown. The outbreak was nicknamed “Enigma outbreak” and is well known by that name. Research of newspaper reports and governmental studies published in the aftermath reveals tornadoes, or in reality, long-track tornado families, struck Alabama, 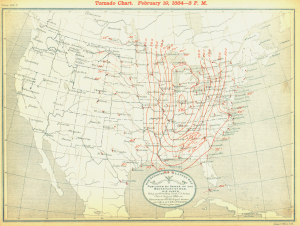 Georgia, Illinois, Indiana, Kentucky, Mississippi, North Carolina, South Carolina, Tennessee and Virginia. It is estimated that at least 50 tornadoes struck those states that day. Some events that had been counted as tornadoes in initial studies, such as those by John Park Finley, were actually downbursts, especially in northern and northeastern portions of the outbreak. Nevertheless, the damage done was nothing to be overlooked.

The majority of the reported tornadic activity was seen across Alabama, Georgia, South Carolina and North Carolina, which were all struck severely by multiple waves of tornado families. In the Southeast, the outbreak began during the late morning in Mississippi, preceded by severe thunderstorms in Louisiana. Shortly thereafter, the outbreak widened and intensified, progressing from Alabama to Virginia between noon and midnight. In addition to the outbreak, wind damage, flash floods, with homes swept away by water in Louisville, Kentucky, New Albany, Indiana, and Jeffersonville, Indiana and other towns along the Ohio River, and Derecho-like effects in the Ohio Valley were also reported in published accounts of the outbreak. In case you didn’t know, a Derecho is a widespread, long-lived, straight-line wind storm that is 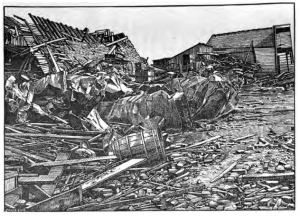 associated with a land-based, fast-moving group of severe thunderstorms. In addition to that, blizzard conditions occurred in the eastern Midwest, as a part of this storm series. According to an article appearing in the Statesville, North Carolina Landmark three days later, the damage tally in Georgia alone was estimated to be $1 million, in 1884 dollars. Today, the damage would have been approximately $23,660,667. That is an astounding figure, and that is just the property damage numbers. Loss of life simply cannot be measured in money. In fact, the greatest mystery surrounding this horrific event is the possibility that, in all likelihood, as many as 1,200 people lost their lives that day at the hands of the 1884 Enigma Tornado Outbreak.