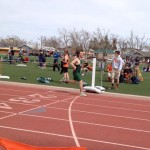 As my grandchildren get closer to graduation from high school, I am beginning to realize just how much I am going to miss all their activities. As little ones, there were the school plays, awards ceremonies, and track day, and they might also play basketball or soccer. Then in summer they might play baseball or some other sport. By the time they were in middle school, the plays were gone, but there was still the occasional concert, basketball, track, and summer baseball. I began to realize that we were at the end of that era after Josh graduated to middle school. Things were very different now. By this time, all three of the other grandchildren had decided that they didn’t want to be in sports in school anymore, although, Chris and Caalab like to play softball on their team from work in the summer, and that is fun to watch too. Still, mostly they were busy with their jobs, studies, and plans for their futures.

I realize that if I want to see much of the school activities anymore, I will need to attend as many of Josh’s track meets as I can. I always liked to go to them, but this years has been more difficult. There were more of them that were during the day and during the work week. Nevertheless, I have been able to make a couple of them. I think it is sad that the closer I get to having no more of these activities, the fewer I am able to get to. I know that I will miss these when they are over.

Today was one of the times I was able to get to Josh’s meet. I really love to watch Josh run. He does best at the long races, and I think that those kids who do the 800 meter and 1600 meter races are to be commended. I like the 400 meter too with Josh. He just seems to be 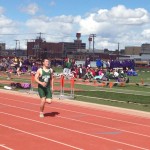 able to bring it on as the race progresses. That is so not like his grandmother. Running is not my thing. I can walk for two hours or more, but running…less that 5 minutes. Josh is my hero in the running arena. This year has been a bit of a transition for Josh, and that has been a little hard. Before, he raced against his own age group, but in high school they all race together. Some of those seniors are quite a bit stronger than Josh. Nevertheless, Josh stood his ground against kids who are bigger, older, and stronger than he is. I know that as he grows, he will be the one who is bigger, older, and stronger, and then he will be in charge. I can’t wait for that day, but in the meantime, I enjoy watching the journey he is on.