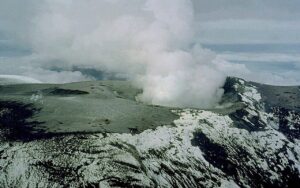 A full year before Nevado del Ruiz, the highest active volcano in the Andes Mountains of Colombia, erupted on November 13, 1985, the mountain began to show warning signs. The people living in the surrounding area, especially the town of Armero, were warned of a pending eruption, but a year is a long time to wait for a predicted eruption to occur, and after a while, the people began to consider the warnings to be false alarms. After a time, life went back to “business as usual” as the people believed the warnings were like a predicted blizzard that never materializes.

When the predicted eruption began on November 13, 1985, the people though they had been right, and the area had dodged a bullet, because the eruption was actually considered a mild one. The eruption produced a series of lava flows that surged over the volcano’s broad ice-covered summit. the super-heated lave became flowing mixtures of water, ice, pumice, and 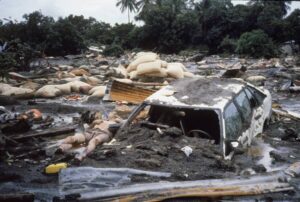 other rock debris that poured off the summit and sides of the volcano, forming “lahars” that flooded into the river valleys surrounding Ruiz. A lahar is a destructive mudflow on the slopes of a volcano. The lahars joined normal river channels, filling them to flood levels. To make matters worse the situation was exacerbated by heavy rain. Within four hours of the eruption, the lahars had traveled over 60 miles, killing more than 23,000 people, injuring over 5,000, and destroying more than 5,000 homes. The town of Armero was the hardest hit, losing three quarters of its 28,700 inhabitants. The lahars destroyed everything in their paths: roads, bridges, farm fields, aqueducts and telephone lines. They wiped out 50 schools, two hospitals, in addition to the more than 5,000 homes. The region lost 60 percent of its livestock, 30 percent of grain and rice crops, and half a million bags of coffee. 7,500 people were left homeless. 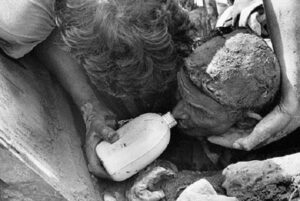 Because there had been ample warning, the losses could have been minimal, if the people living in the river valley had moved to higher ground. It’s not completely their fault. We humans, have a tendency to lose faith in what we have been told, when thing don’t happen immediately. After a year of hearing that the volcano was going to erupt, people began to think that the vulcanologists were wrong. Then, when it did start, it didn’t seem to be the horrendous eruption that had been predicted. All this led to a lack of a feeling of urgency, and thereby, they death of 23,000 people. So very sad that we could so carelessly refuse to take heed.