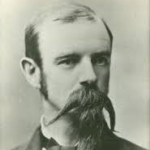 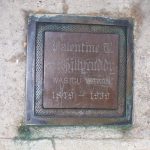 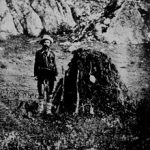 Valentine Trant O’Connell McGillycuddy was born on February 14, 1849 in Racine, Wisconsin to Irish immigrants Daniel McGillycuddy (1821–1892), a merchant, and Joana (Trant) McGillycuddy (1813–1892). His brother, Francis was 6 years older than he was. The McGillycuddy family moved to Detroit when Valentine was 13. At 20 years of age, McGillycuddy graduated from the Detroit Medical School. He began working as a doctor at the Wayne County Insane Asylum and practiced medicine for one year, a job that nearly drove him crazy…literally. Next, he began teaching at the medical college. His longstanding love for the outdoors eventually led McGillycuddy to leave the city medical field. At the request of Army engineer, General Cyrus Comstock, McGillycuddy surveyed and mapped the Great Lakes and Chicago’s devastation after the Great Fire. He probably could have stayed and continued working for the Army in the Great Lakes area, but his heart was in the West.

In 1875 he joined the US Geological Survey sponsored Newton-Jenney Expedition to the Black Hills. This trip would set the course for the rest of his life. Part scientific exploration, part treasure hunt, the expedition was fueled by the trip George Armstrong Custer made into the land of the Lakota and the reports of gold he brought back. Following that trip, McGillycuddy was appointed as the Army surgeon at Nebraska’s Fort Robinson and later administrator at Nebraska’s Red Cloud Agency in 1877. That appointment led to a friendship with Crazy Horse, and antipathy toward Red Cloud, both powerful leaders of the Dakota plains.

McGillycuddy had an uncanny knack for being at the right place at the right time, which put him right in the middle of things during the most consequential era of the American frontier. He met, treated, befriended, or opposed some of its most iconic figures including Little Big Horn principals, George Armstrong Custer, General George Crook, and Major Mark Reno, as well as Buffalo Bill Cody, Wild Bill Hickok, Calamity Jane Canary, the legendary Sioux chiefs Sitting Bull and American Horse, and John Wesley Powell…the man who mapped the Grand Canyon.

It also placed him squarely in the middle of a deadly struggle between the young upstart, Crazy Horse and the dominant chief of the Oglala Lakota, Red Cloud. The two were on different sides of just about everything. Crazy Horse resisted Anglo-American incursion at every turn, taking part in nearly every important battle including the Little Big Horn and the subsequent Dakota War. Red Cloud, who signed the 1851 Treaty of Fort Laramie, was deeply disappointed in the outcome. After having his own war named for him, Red Cloud’s War of 1866, he was finally willing to go along to get along. He and his band settled on the reservation, where he squabbled with Dr John J Saville, the government’s agency man.

McGillycuddy was at Fort Robinson when Crazy Horse surrendered in 1877. The move may have partially been prompted by his wife’s illness. McGillycuddy successfully treated Black Shawl. Some say she had tuberculosis and others claim it was cholera, which killed her three-year-old daughter. Whatever her ailment, saving her life brought about a close bond between Crazy Horse and the doctor. Six months after he surrendered, Crazy Horse was dead. Many people think he was assassinated, stirring a controversy that remains unresolved to this day. McGillycuddy spent the the wounded Crazy Horse’s last hours at his bedside. Varying accounts of the incident were provided by eye witnesses. Army Private William Gentles, an Irish immigrant soldier with a sketchy military career is a prime candidate for the killing of Crazy Horse, stabbing him with a bayonet. The Army’s retelling has Crazy Horse challenging the guards with two concealed knives as they attempted to lock him up, however. In the struggle, he fell on his own weapon. This version was attributed to Charging Bear, the real life “Little Big Man.” He is depicted as either a Crazy Horse lieutenant and “Shirt Wearer,” or a jealous rival who sought to curry favor with his Army captors. A number of Lakota genealogists lean heavily toward the latter, describing him as manipulative. He received a medal for his involvement in the incident.

McGillycuddy certified that his friend, Crazy Horse died near midnight on September 5, 1877, saying his killing “absolutely inexcusable.” Little Big Man was just part of the conspiracy. Crazy Horse was surrounded by shadowy characters. French and Lakota translator, William Garnett, thought that Little Big Man was the killer, but more than a dozen witnesses say an Army guard, perhaps Gentles, stabbed Crazy Horse. In the aftermath, Garnett was labeled a spy. Supposedly Garnett had no connection to Red Cloud, but Nellie Larrabee did. It was speculated that perhaps married to Crazy Horse, Larrabee, known as Chi Chi and Brown Eyed Woman, was sent to the Crazy Horse, Black Shawl household by Red Cloud. It was thought that she was there to act as a spy. Red Cloud was definitely not a fan of Crazy Horse. He thought his resistance to US forces was detrimental to the Lakota cause, but Red Cloud may have also been jealous of the attention the Army gave him. And then things got complicated. Red Cloud and Spotted Tail, a relative of Black Shawl, joined forces against the government’s attempts to seize tribal lands. Spotted Tail approved the Fort Laramie Treaty but continued to fight for sovereignty when the terms of the treaty were not met. Like Red Cloud, he believed it was a fool’s errand to oppose the government on the battlefield.

Along with Garnett, many Lakota deeply mistrusted Larrabee, calling her an “evil woman,” who helped lead Crazy Horse into a “domestic trap” that eventually caused his downfall and placed Spotted Tail in a Red Cloud conspiracy, as well. Others say Spotted Tail was unaware of any plot against Crazy Horse. After Crazy Horse died, McGillycuddy was named the Indian Agent on the Pine Ridge. His old enemy, Red Cloud had a hand to his downfall, accusing him of mismanagement and wrongdoing. A number of investigations were launched into the claims. Still McGillycuddy did his job, and amid charges of “tyranny” and fraud, he established a reservation police force and a boarding school. The breaking point came when the doctor was ordered to fire an otherwise blameless clerk. Rather than do so, he resigned his position in October of 1882 and moved with his wife Frances “Fanny” (Hoyt) McGillycuddy to Rapid City.

It was the end of an era. McGillycuddy served as Dean of the South Dakota School of Mines and Technology and was appointed South Dakota’s first State Surgeon. He was elected Rapid City mayor in 1897, but when Fanny died, he moved to California. Later, he married Julia Blanchard and enlisted at the start of World War I, serving Alaska and the western states during the 1918 Spanish Flu pandemic. His nemesis, Red Cloud, the last and one of the best known Lakota leaders, outlived nearly all of them. He died on the Pine Ridge Reservation, December 10, 1909 at 87 after converting to Christianity. He claimed the government had made many promises, but kept only one, saying, “They promised to take our land…and they took it.” There are 128 known photographs of Red Cloud, none of Crazy Horse, save a latter-day image found in a derelict photo studio in Chadron, Nebraska. It is still unverified. Black Shawl died in 1927, presumably of influenza. Helen “Nellie” Larrabee is believed to have died in about 1880. One source lists her burial in Charles Mix County near the present day Lake Andes, South Dakota.

Valentine McGillycuddy died on June 6, 1939, at the age of 90. Flags were lowered to half staff on the Pine Ridge at the news of his passing and his ashes were interred on Black Elk Peak in the Black Hills. Formerly known as Harney Peak, he had scaled the mountain as a young surveyor with the Newton-Jenney expedition. A simple stone monument reads “Valentine T. McGillycuddy, Wasicu Wakan, (Holy White Man) 1849-1939.”

Valentine McGillycuddy’s grave site, Custer State Park, South Dakota, is accessible only by hiking trails, the most commonly used is Trail No. 9, from the Sylvan Lake Day Use Area. It is a site my husband, Bob and I have visited 15 times over the years. The three-mile hike through the ponderosa pine leads to the former fire tower atop what is now Black Elk Peak.