For many years my husband’s Aunt Marian and Uncle John Kanta lived in Helena, Montana. Some of their kids still do, but they didn’t live there in 1935, when on October 18th, a magnitude 6.2 earthquake struck at 10:48pm. The quake had its epicenter right near Helena and it had a maximum perceived intensity of VIII (Severe) on the Mercalli intensity scale. The quake on that date was the largest of a series of earthquakes that also included a large aftershock on October 31 of magnitude 6.0 and a maximum intensity of VIII. Two people died in the first quake, and two others died as a result of the October 31 aftershock. Property damage was over $4 million.

Helena is a pretty city that lies in a valley in western Montana. It lies within the northern part of the Intermountain Seismic Belt (ISB). I didn’t know it then, but this is an area of relatively intense seismicity. It runs from northwestern Arizona, through Utah, Idaho, and Wyoming, before dying out in northwestern Montana. In the area near Helena, it turns to the northwest, where it intersects with the Lewis and Clark fault zone. The Helena earthquake sequence actually began October 3, 1935, with a small earthquake. That quake was followed by a damaging earthquake on October 12th, a magnitude 5.9, intensity VII. That wasn’t the mainshock, however. That one occurred on October 18th, a magnitude 6.2, intensity VIII. A lesser shock followed on October 31st, a magnitude 6.0, intensity VIII, and a further large aftershock on November 28th, a magnitude 5.5, intensity VI. These were just the mainshocks. There were also a total of 1800 tremors recorded 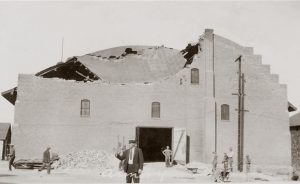 between October 4, 1935 and April 30, 1936. The people of Helena either got used to the shaking, which I can’t imagine, or they were terrified with every tremor, which makes more sense to me.

The damage to the unreinforced buildings of that era was widespread, with more than 200 chimneys destroyed in the city of Helena. At that time, little was known about reinforcement of buildings in earthquake prone areas. The northeast part of the city, where buildings were constructed on alluvial soil, and in the southern business district, which contained many brick buildings, saw the strongest effects. Alluvial soil is highly porous, which would explain the soil liquification that took place. The most extensively damaged building was the Helena High School, which was completed in August 1935 and had just been dedicated in early October. The school buildings, which had cost $500,000, had not been designed to be earthquake resistant. Another building that was totally destroyed and had to be rebuilt was the Lewis and Clark County Hospital. The October 18 earthquake caused an estimated $3 million of damage to property. The aftershock of October 31 caused further damage estimated at $1 million, particularly to structures already weakened by the October 18 shock. Two people were killed by falling bricks in Helena during the October 18 shock. Two brick masons died as while removing a brick tower during the October 31 aftershock. 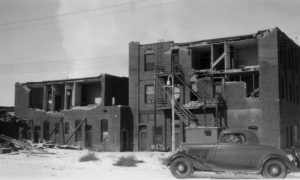 The Red Cross and Federal Emergency Relief Administration set up emergency camps for those displaced by the quake on land at the Montana Army National Guard’s Camp Cooney. Approximately 400 people stayed there the first night, but most had found space with friends or family outside of the damaged area by the end of the week. Some people were too afraid of continued shocks to stay in a house, and they stayed in tents for the next few weeks. The National Guard was deployed in Helena to keep sightseers away from the damaged buildings, and either because of the guard or the good moral values of the people, there was no looting. It is believed that in today’s world, the damages would have been in the $500 million range.

One Response to Helena Earthquake Sequence