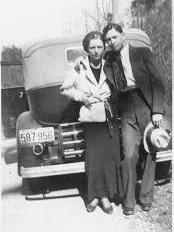 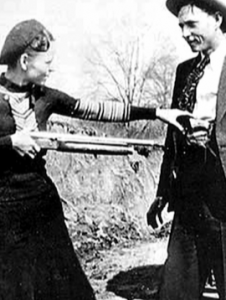 Most of the time, when we think of crime and criminals, we think of the worst evil there could be in a person, and I suppose that some criminals have more evil tendencies than others, but once in a while, someone decides to put a bit of a different twist on their crime…intending to romanticize it or give it a Robin Hood feel. In a large part, it is the media that truly romanticizes it or gives it notoriety. If the media didn’t report on every episode of the criminal’s life of crime, perhaps it would not seem so exciting to people, and maybe it wouldn’t inspire other criminals to…go for it. It all seems so exciting, at least that’s how the media plays it up.

In reality, Bonnie and Clyde…notorious robbers and murders lived a very basic existence, and in many ways it was disgusting. Despite common popular culture depictions of Bonnie and Clyde, their life on the run was far from glamorous. They often ate sardines from the can, bathed in rivers, and drove through the night, taking shifts sleeping and driving, all in order to evade capture. They hid out in the forest, hoping not to be seen…always standing guard…always watching. Bonnie Parker met Clyde Barrow in Texas when she was 19 years old. Her husband, whom she married when she was 16, was serving time in jail for murder, and Clyde seemed exciting. Shortly after they met, Barrow was imprisoned for robbery. Bonnie visited Clyde every day, and smuggled a gun into prison to help him escape. He did escape, but was quickly recaptured in Ohio and sent back to jail. When Clyde was paroled in 1932, he immediately hooked up with Bonnie, and the couple began a life of crime together. Apparently Bonnie had a thing for bad boys…to her detriment, in the end.

The pair stole a car and committed several robberies, before Bonnie was caught by police and sent to jail for 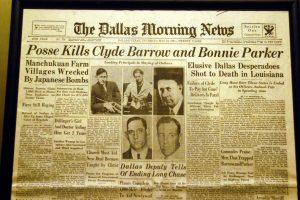 two months. Immediately after her release in mid-1932, she hooked up with Clyde again. Over the next two years, the couple teamed with various accomplices to rob a string of banks and stores across five states…Texas, Oklahoma, Missouri, New Mexico and Louisiana. To law enforcement agents, the Barrow Gang, including Clyde’s childhood friend, Raymond Hamilton, W.D. Jones, Henry Methvin, Barrow’s brother Buck and his wife Blanche, among others, were cold-blooded criminals who didn’t hesitate to kill anyone who got in their way, especially police or sheriff’s deputies. To the public, however, Bonnie and Clyde’s reputation as dangerous outlaws was mixed with a romantic view of the couple as “Robin Hood”-like folk heroes. Their fame was increased by the fact that Bonnie was a woman, which made her an unlikely criminal, and by the fact that the couple posed for playful photographs together, which were later found by police and released to the media. Police almost captured Bonnie and Clyde in the spring of 1933, with surprise raids on their hideouts in Joplin and Platte City, Missouri. Buck Barrow was killed in the second raid, and Blanche was arrested, but Bonnie and Clyde escaped once again. In January 1934, they attacked the Eastham Prison Farm in Texas to help Hamilton break out of jail, shooting several guards with machine guns…killing one.

Texan prison officials hired Captain Frank Hamer, a retired Texas police officer, as a special investigator to track down Bonnie and Clyde. After a three month search, Hamer traced the couple to Louisiana, where Henry Methvin’s family lived. Bonnie and Clyde appeared, the officers opened fire, killing the couple instantly in a hail of 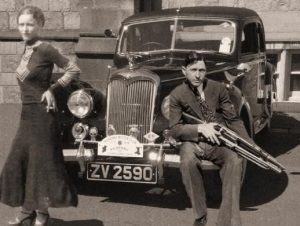 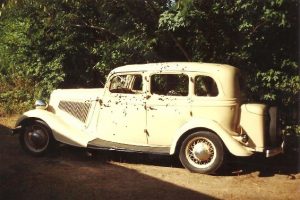 bullets. All told, the Barrow Gang was believed to have been responsible for the deaths of 13 people, including nine police officers. Bonnie and Clyde are still seen by many as romantic figures, however, especially after the success of the 1967 film Bonnie and Clyde, starring Faye Dunaway and Warren Beatty. It’s really a sad thing when crime is romanticized, because people think of it as an exciting, when in fact, it is a dead end road.

One Response to Romanticizing Crime