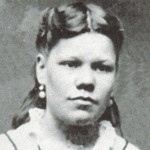 A couple’s wedding day is quite possibly the most wonderful day of their lives. It is that moment when all their hopes and dreams begin to come to life. The wedding day is quickly behind them and they begin their journey out into the future to build the life of their dreams…but not always. Theirs was a love, young and hopeful. Her family, my great great grandparents, Allen and Lydia Spencer, loved the young man their daughter, Matilda had fallen in love with. They nicknamed him W Biller, although his name was William Beller…it was their way of showing him that they liked him, and they were happy to welcome him into their family. Although their daughter, Matilda was young by today’s standards, at just over 17 years of age, she was of an acceptable age for marriage in 1879, and so she married the man of her dreams, but theirs was not to be the fairytale ending of happily ever after, because in just three short days, Matilda’s life would be over.

The death records would show Brain Fever as the cause of death, and these days few of us would even know what that is. It is a term, not commonly used today, that described one of three illnesses that most of us do understand today…Meningitis, the 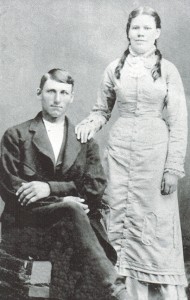 inflammation of the membranes covering the brain and spinal cord; Encephalitis, an acute inflammation of the brain, commonly caused by a viral infection; or Cerebritis, inflammation of the cerebrum. I can’t say which of these diseases caused my great grand aunt’s death, but I can imagine the devastation her husband of only three days felt as his precious bride was taken from his life, leaving him to wonder what had happened, and how he could possibly go on. A young man of just 19 years of age should not have to experience marriage and widowhood within three days of each other…truly, no one should.

As I read the account of the short marriage of my great grand aunt and uncle, I felt the pain he must have felt. Without the knowledge we have today, my guess is that he had no idea that something was terribly wrong. He and his young bride traveled from her home in Webster City, Iowa to their home in Boone, Iowa, just 32 miles away, but when the time came, I’m sure that distance felt like thousands of miles. Getting her parents to her before she passed probably didn’t happen, and he must have felt like he failed her in every way possible…failed them. I’m sure he felt like he should have been able to take better care of their daughter than that, and yet he didn’t know what he could have done, because he had no real idea what had happened. His life had gone from married bliss to lost dreams practically overnight.

It would take him three years to finally move forward with his life, when he would marry 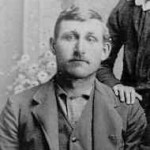 Nellie Vanderbilt. Their lives would take a different path, and they would have six children. I’m sure he loved her very much, but I have to think that as he was having his second set of wedding pictures taken…in the exact same pose as his first set of wedding pictures, that his mind wandered back, just for a moment…to the bride of his youth, that seemed so far away now. His face looked a little distant…sad even. At 23 years of age, my guess is that he felt old…much older than his age would have you believe, but widowhood at such a young age would do that to a person. I’m happy for him that he had a good life in the end, and yet still sad that he had to live with the lost dreams of his youth hiding there in the back of his mind.