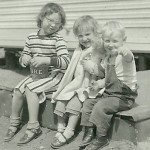 When you put three kids together out in the country, where they can’t go play with friends, they have to use their imaginations to find fun things to do. And when two of the kids are quite a bit younger, it is left to the oldest to brainstorm the adventures. Such was the case when Bob and his sisters, Marlyce and Debbie were young. Most often the play was the average kid stuff that all kids play, but sometimes they got into a little mischief.

I’m told of a time when my mother and father-in-law were outside milking a cow and the kids were in the house. I’m not sure who came up with the idea, but both Bob and Debbie have told me that it was Marlyce, and that’s their story, and they are sticking to it. The kids weren’t alone in the house very long, but when you put a bag of uncooked macaroni into the toilet, and don’t tell your parents, and it sits there for a little while…well, it expands, and sticks together like glue, and my mother-in-law told me that they broke the toilet. I have tried to figure out how macaroni could break a toilet, and I just can’t completely figure it out, but what is very clear in my head is that if the macaroni broke the toilet, there was one big mess to be cleaned up.

I don’t know for sure what they were playing, but my guess would be that the toilet reminded them of a big cooking pot, so they were pretending that they were cooking dinner. Gross as that may sound. And they are not alone in that kind of play. One of my sisters used to mix Comet, and different shampoo and conditioner types in the toilet. I guess it makes a good test tube too. 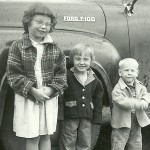 The thing that really strikes me a funny, is that the very same children who can get themselves into so much mischief…who can make such big messes…who can cause so much trouble, can also have such angelic little faces. And sometimes those angelic little faces happen right after the big troublemaking mischief they just got into. It can make it hard to be mad at them sometimes, although my guess is that this was not one of those times. I feel pretty safe in saying that even with their angelic faces or at least the attempt at angelic faces, we simply not enough to get then out of the trouble that this triple play got them into.