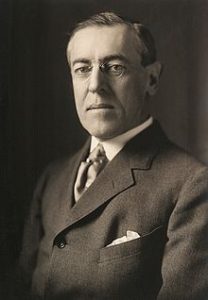 The United States has tried to stay out of most of the wars the rest of the world has become involved in, but sometimes circumstances have drawn us into wars we didn’t want to enter. World War I is a prime example of just such a situation. On February 26, 1917, President Woodrow Wilson learns of the so-called Zimmermann Telegram. The telegram was a message from German Foreign Secretary Arthur Zimmermann to the German ambassador to Mexico proposing a Mexican-German alliance in the event of a war between the United States and Germany. This telegram was a crucial step toward the entry of the United States into World War I.

On February 24, 1917, British authorities gave Walter Hines Page, the United States ambassador to Britain, a copy of the Zimmermann Telegram. It was a coded message from Zimmermann to Count Johann von Bernstorff, the German ambassador to Mexico. 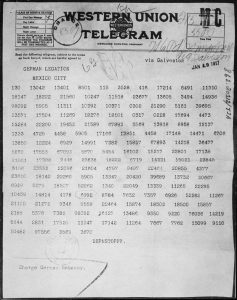 In the telegram, which was intercepted and deciphered by British intelligence in late January, Zimmermann instructed his ambassador, that in the event of a German war with the United States, to offer significant financial aid to Mexico, provided Mexico agreed to enter the conflict as a German ally. Germany also promised to restore to Mexico the lost territories of Texas, New Mexico and Arizona. Now, when you think about it, that is some big promises for Germany to be making, but I supposed that if the event of a loss in the war, all promises were null and void.

Upon learning about the proposed agreement between Germany and Mexico, the State Department was quick to send a copy of the Zimmermann Telegram to 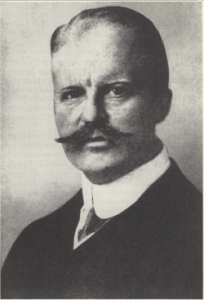 President Wilson. The president was shocked by the note’s content and the next day proposed to Congress that the United States should start arming its ships against possible German attacks. Wilson also authorized the State Department to publish the telegram. It appeared on the front pages of American newspapers on March 1, and it left many Americans horrified. The telegram was quickly declared a forgery by the public, but two days later, Zimmermann himself announced that it was genuine.