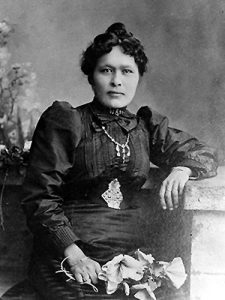 When we think of the gold rush years, we don’t usually think of it in terms of women…at least not women who were there for something other than saloon work. Nevertheless, there were a few women who headed west to actually seek their fortune in gold. The first woman of the Klondike Gold Rush was Shaaw Tláa, also known as Kate Carmack. Strangely, she is rarely mentioned as one of the original discoverers of gold in Bonanza Creek. Nevertheless, in August 1896, she was there with George Carmack, Skookum Jim Mason, and Dawson Charlie when they found little flecks of gold glistening in the creek. Shaaw Tláa was a Tagish Indian woman who was born near Bennett Lake in the Yukon Territory of Canada in about 1857. Her father, Kaachgaawáa, was the head of the Tlingit grow clan, while her mother, Gus’dutéen, was a member of the Tagish wolf clan. She grew up with her parents and seven brothers and sisters near Carcross, Yukon.

As a young woman, she married her first cousin, a Tlingit Indian named Kult’ús. Sadly, in the early 1880s, he and their infant daughter died of influenza in Alaska. Kate then returned to her village in the Yukon. In 1887, her brother, Keish, known as Skookum Jim Mason; and her nephew, Káa Goox, known as Dawson Charlie started a packing, hunting, and prospecting partnership with an American named George Washington Carmack. Within a year, she became Carmack’s common-law wife, took the name Kate Carmack, and began to travel with the three men. Beginning in 1889, and for the next six years, the couple lived in the Forty Mile region of the Yukon. There, George Carmack prospected, trapped, and traded, while Shaaw Tláa made winter clothing that she sold to miners. The couple had one daughter, Graphie Grace Carmack, who was born in 1893, at Fort Selkirk.

In August 1896, Kate and George were traveling in remote Canada with her brother, Skookum Jim and nephew, Dawson Charlie. As they made their way back, they stopped to rest beside a Bonanza Creek which emptied into the Klondike River on August 17, 1896. When Skookum Jim bent over to get a drink, he saw flecks of gold 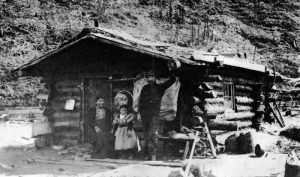 glistening on the bottom. This find would soon set in motion the Klondike Gold Rush. For the next two seasons, George and Kate along with the other two men worked their claims. Beyond that, little changed in Kate’s life. After becoming wealthy, the little family traveled to Seattle and visited George’s sister Rose on her ranch in Cambria, California in the fall of 1898. While they were in Seattle, George flaunted his new found wealth riding around town in a carriage displaying a sign that said, “Geo. Carmack, Discoverer of Gold in the Klondike” and tossing coins to crowds. In the meantime, adapting to big city life was not easy for Kate and at one point she was arrested for making a public disturbance. The Seattle Times was quick to print the story: “Mrs. George W. Carmack, the Indian wife of the discoverer of the Klondike, who is probably the richest Indian woman in the world, was fined $3.60 by Judge Cann this morning for drunkenness.”

Within a year, the marriage was falling apart and George sent Kate and Graphie to live with his sister, Rose in California. He never returned. George then went to Dawson, Yukon and continued to flaunt his “discoverer” status. He soon met Marguerite Saftig Laimee, a woman of questionable repute. Representing herself as the owner of a “cigar store,” Laimee was, in fact, the owner of a brothel. But George didn’t care and soon wrote his sister Rose, asking her to send Kate back to her clan, and informing them that he intended to marry Laimee. Kate, however, refused to be tossed aside and made a legal appeal for her share of the couple’s $1.5 million worth of gold discoveries. She sued for divorce on the grounds of desertion and adultery. But, the court didn’t recognize the common-law marriage. In July 1900, Kate and Graphie returned to Carcross. Her brother, Skookum Jim built her a cabin near his and Graphie attended mission and residential schools. Later that year, George Carmack married Marguerite Laimee in Olympia, Washington.

Kate never received her share of any mining riches. In the end, she found herself living off of a government 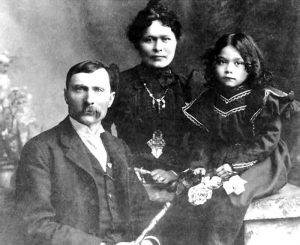 pension and earning a small income from selling needlework to tourists. George still had one last blow to throw at Kate, however. When her daughter Graphie was 16, George lured her to Seattle. It was a devastating loss for Kate, because she firmly agreed with the Tagish belief that children belong with their mother’s clan. She lived the rest of her life in Carcross and died at the age of 63, during a flu epidemic on March 29, 1920. She was buried in the Carcross cemetery. George died a rich man in Vancouver, Canada in 1922. Marguerite inherited his wealth and died in California in 1949. Graphie, married Marguerite’s brother, Jacob Saftig when she was 17. The couple lived in Seattle, Washington and had three children. Later, she divorced Jacob, moved to California, and remarried twice. She died at the age of 70 in 1963 in California. She never saw her mother again.