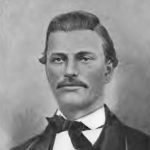 The move west to settle America was seldom a peaceful move. These days we think of loading up our car, and moving to a new city…done and easy, but it wasn’t so back then. There were outlaws, Indians, and unknown perils that could end a trip west, almost before it got started. There were a number of trails commonly used to get to the gold fields in the west, but the Bozeman Trail was one of the most violent, quarrelsome, and ultimately failed experiments in American frontier history. The trail was named for John Bozeman, an emigrant from Georgia, who was said to have blazed the route, but in actuality, the Indians had been using the route as a travel corridor for centuries. Nevertheless, John Bozeman did play a part in the trail. In 1863, Bozeman and partner, John Jacobs widened this corridor for use as a wagon road. They were following in much the same footsteps as Captain William Raynolds had four years earlier in a mapping and exploration expedition for the Army Corps of Topographic Engineers. The plan was to make the trail a shortcut to the goldfields in and around Virginia City, Montana territory. The Bozeman route split off of the Oregon Trail in central Wyoming. Then it skirted the Bighorn Mountains, crossed several rivers including the Bighorn, then traversed mountainous terrain into western Montana. The trail follows a very similar route to the current roads that meander through Wyoming today. The Bozeman trail had several advantages, including an abundant supply of water along with the most direct route to the goldfields, making it the go to trail of that era.

Still, the trail had one major drawback. It cut through the heart of territory that had been promised to several Indian tribes by the Treaty of Fort Laramie in 1848, making the people traveling the trail…the outlaws. The area included the rich hunting grounds of the Powder River Country, claimed by the Sioux and other tribes. They were not feeling very hospitable about these “white men” traipsing through their hunting grounds, killing their animals, and running off many in the herds. Nevertheless, the first emigrant trains began traveling up the trail not long after Bozeman and Jacobs had finished marking the route. In 1864, a large train of 2,000 settlers 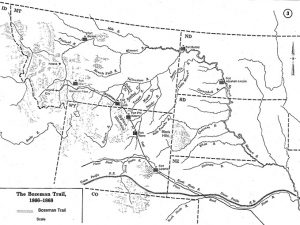 Then the people started to put pressure on the United States government to protect the travelers. In 1866, United States Army troops were dispatched to construct three forts along the trail, which would supposedly offer protection to wagon trains. These posts, running from south to north, were Forts Reno, Phil Kearny and C.F. Smith. Ominously, each of these forts was named after a general that had died during the just completed Civil War. Somehow that doesn’t seem to instill a lot of hope…at least to me. With the installation of the forts, the trail had, in effect become a military road. The protection afforded by the United States Army presence enraged the tribes. With that intervention came a two year conflict, known as Red Cloud’s War. Under the leadership of Oglala Lakota chief Red Cloud, raids and ambushes were carried out against soldiers, civilians, supply trains and anyone else who dared to attempt the trail.

Three famous skirmishes were The Fetterman Massacre, in December, 1866, in which an army detachment of 79 soldiers and 2 civilians led by Captain William Fetterman were lured from Fort Phil Kearney and ambushed within a few miles of the fort. On August 1, 1867, the Hayfield Fight, where 19 soldiers and 6 civilians detailed for guard and hay cutting duty were attacked. The Indians held them under siege for over 8 hours, but they managed to hold off 500 hundred warriors until help arrived. And finally, The Wagon Box Fight, where a detachment of 31 soldiers sent out to guard a team of wood cutters, was encircled. They fought off numerous attacks over a five hour period from hundreds of warriors. These continued raids and skirmishes were the rule that proved that peace was not going to be the reality they had hoped. Life guarding the trail was a 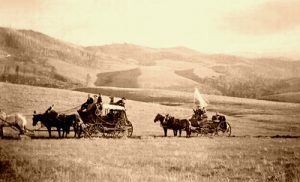 combination of tension, monotony, and loneliness. Soldiers on the verge of mutiny and even cases of insanity, deserted their posts. With few, if any, emigrants using the trail, because they were too afraid, the army sequestered behind fortress walls and tribes showing few signs of easing up on attacks. Finally, the United States government decided to pursue a peace policy. The second (1868) Fort Laramie Treaty recognized the Powder River Country once again as the hunting territory of the Lakota and their allies. A presidential proclamation was issued to abandon the forts. The Bozeman Trail was history, and for the first time, the United States government had lost a war. What a shock that must have been for our nation.