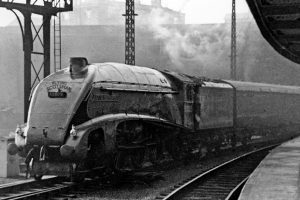 I think most people love trains. The fascination of stepping onboard, and arriving at a totally different place without driving or flying is an alluring thought, not to mention a little romantic. Over the years, trains have been given names, almost as if they were alive and had personalities. In England, one of the most loved trains was The Flying Scotsman, so named in 1924, after the train had been in operation since 1862. The train was an express train, and was clocked at 100 mph on a special test run in 1934. It officially the first locomotive in the United Kingdom to have reached that speed. In those days, that was a phenomenal achievement…unheard of really. 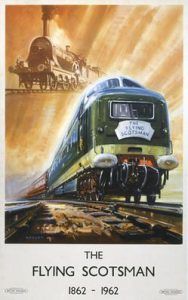 The original journey took 10½ hours, including a half-hour stop at York for lunch. However, increasing competition and improvements in railway technology saw this time reduced to 8½ hours by the time of the Race to the North in 1888. From 1896, the train was modernized with such features as corridors between carriages, heating, and dining cars. The York stop was reduced to 15 minutes, as passengers could now have lunch on the train, but the end-to-end journey time remained 8½ hours.

It was the British Empire Exhibition made Flying Scotsman famous. Soon, it was featured at many more publicity events for the LNER. In 1928, it was given a new type of coal-car with a corridor, which meant that a new crew could take over without stopping the train. This allowed it to haul the first ever non-stop London to Edinburgh service on May 1, reducing the journey time to eight hours. The Flying Scotsman name has been maintained by the operators of the InterCity East Coast franchise since privatization of British Rail. The former Great North Eastern Railway even subtitled itself The Route of the Flying Scotsman, as a way of cashing in on of the train’s popularity. The Flying Scotsman was operated by GNER from April 1996 until November 2007, then by National Express East Coast until November 2009, East Coast until April 2015 and since by Virgin Trains East Coast.

On May 23, 2011 the Flying Scotsman brand was re-launched for a special daily fast service operated by East Coast departing Edinburgh at 05:40 and reaching London exactly four hours later, calling only at Newcastle. It is 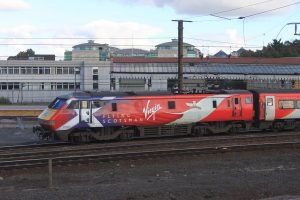 operated by an InterCity 225 Mallard set. Driving Van Trailer 82205 and 91 class locomotive 91101 were turned out in a special maroon livery for the launch of the service. East Coast claimed that this was part of a policy to bring back named trains to restore “a touch of glamour and romance”. However, for the first time in its history, it ran in one direction only. There is no northbound equivalent service. This schedule is still maintained today. Northbound, the fastest timetabled London to Edinburgh service now takes 4 hours 20 minutes. In October 2015, 91101 and 82205 were give a facelift of new vinyl in a new Flying Scotsman livery. The Flying Scotsman is the only passenger service to run non-stop through Darlington and York.