Until Rachel Came Along 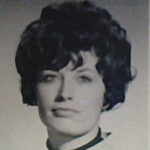 Today is my sister-in-law, Rachel’s birthday, and it seemed to me a fitting day to pay tribute to the woman who gave birth to this girl who joined our family 2 years and 9 months ago. Rachel’s mother died when Rachel was a young girl, and yet I believe that the influence of her mother is alive in Rachel today. Rachel showed me this picture of her mother a while back, and told me a few things about her own life, but it wasn’t the things Rachel told me about her life, but rather the way she looked at the picture of her mother that struck me. There was such love in her eyes, mixed with a yearning for just one more moment with her mom. I couldn’t imagine what it must have been like to grow up without your mom, especially for a girl. Girls just need their mom at several key points in their life, and my heart hurt for this woman, my new sister-in-law, and the child she had been when her mother was taken from her  by illness, as well as the teenager, young woman, and now the adult woman, who still felt the loss very deeply. 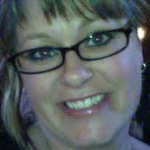 While I know that Rachel’s mother was not in her life during the toughest years of her life, I believe that deep down inside of Rachel, her mother’s influence lived on. As Rachel worked her way through the teenaged years, into motherhood, and beyond, the memories of the kind of mother her mother was lived on inside her. A little child remembers the way their mother was…her gentle touch, as she held them close…her perfume, as beautiful as she was…her voice, calling them in for supper…all the little things that made her their mom. I could see in Rachel’s eyes that she carried those memories into her life in the present, and the kind of mother she is to her children.

As Rachel grew, and her life moved forward, through the changes that take place, whether we like them or not, I believe that she chose to be the kind of woman her mother was, and

the kind of woman that God would want her to be. And, it is that woman that came into the life of my brother-in-law, Ron 2 years and 9 months ago. With her she brought her daughter, Cassie and son-in-law, Chris; and her two sons, Riley and Tucker. Rachel’s grandson, Lucas would join their family on July 3, 2011. Rachel has made Ron’s life complete. She has brought love and happiness into his life again. Ron’s life following his own divorce was lonely and, to me, it seemed like he wasn’t sure he would ever be happy again…until Rachel came along…bringing with her the best qualities from the memories of her mother. Today is Rachel’s birthday. Happy birthday Rachel!! Have a wonderful day!! We love you!!