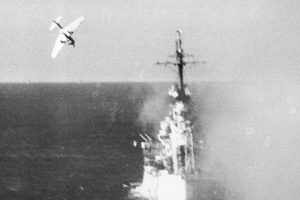 World War II brought with it, something of an anomaly when it came to Japanese pilots…the Kamikaze pilot. It is said that these men “volunteered” for these mission. In an act that can only be described as insane, they flew their fighter planes straight into the ships of the enemy. Most people can’t imagine doing such a thing, and we might even assume that these pilots were really wanting to commit suicide. Most often that was not the case, although I suppose there may have been some who wanted to go down in “a blaze of glory” for their country.

The Japanese government had a unique way of accomplishing what they wanted done. When the new soldiers came into the camps, they were given a piece of paper with three options listed on it. They could volunteer willingly, simply volunteer, or not volunteer. Because the pilots names were on the papers, they felt intimidated. The pressure was intense, and 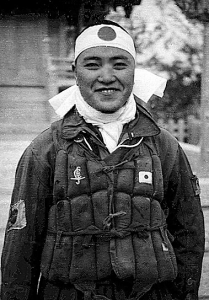 not only to volunteer as kamikaze pilots, but they would jump off a cliff so that they would not be captured. I guess I can understand the fear of capture, but I don’t know that I could take my own life as a means of escaping capture. Most people have such a strong survival instinct that in situations that seem hopeless, they would rather sacrifice a limb than their lives. In fact one such case, a man had been fishing when a boulder rolled down a hill and pinned his hand. He tried everything he could think of to free his hand, and then when there was no other option, he actually chewed his hand off, and got himself to the hospital for treatment. You might say, “well, his hand was probably dead anyway,” and you might be right, but would that inspire you to chew your hand off? I don’t think so, nevertheless, he did it, in order to live. And yet, these Kamikaze pilots flew into planes, ships, or buildings to take out as many people as they could, and in the event of being overtaken by the enemy, they chose suicide.

Of course, their beliefs were similar to those of the Muslim suicide bombers. They somehow think that there is honor in these acts. In reality, the Kamikaze pilot doesn’t even think about the enemy. It’s really not about the enemy. They think about the “honor” they have been given to give up their life for the emperor. Well, I would give up my life rather than turn my back on God, and I suppose that is sort of what they are doing, but when 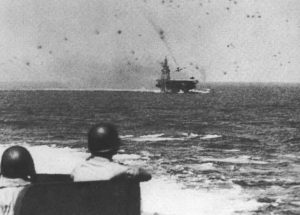 the country’s leader becomes your “god,” you are already in a lot of trouble. That is basically the position the Kamikaze pilots found themselves in. They had been conditioned to unquestioningly die for the emperor. Kamikaze Pilots Believed They Would Meet Again At The Yasukuni Shrine…similar to the seventy virgins, I guess. The only soldiers who were exempt from being Kamikaze pilots were firstborn sons. The only other way out was engine trouble, in which case, they could live to die another day. Some of the pilots even faked engine trouble to stay alive, but in the end, they hated themselves so much for doing so, that on the next mission, they did their “duty” to their emperor. Amazing, isn’t it?