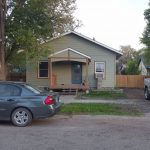 My niece, Kayla Stevens joined our family when she married my nephew, Garrett almost two years ago. In that time much has changed in Kayla’s life. When Kayla and Garrett met, she was living in Casper and going to college. They hit it off right away, and can thank Garrett’s sister, Lacey for introducing them, because they both knew that they had found their forever love. They lived next door to my mom, Collene Spencer, Garrett’s grandma for quite a while, much to the pleasure of many of her great grandchildren, who all loved to go see Kayla and Garrett, and who were always treated so well by both Kayla and Garrett, that the kids would have probably stayed for hours if their parents hadn’t made them come home. Kayla and Garrett love children, which is a well known fact to all who know them.

After Kayla completed her college, she began to look for jobs in her chosen field of Social Work. They knew they wanted to be either in Casper, where his family lives, or Sheridan, where her family lives, so she applied in these places, and they let the job offers decide where they would settle down and eventually raise a family of their own. When the best offer was in Sheridan, Kayla accepted and they moved to Sheridan. Her job at Wyoming Mental Health Clinic is going well. She started out on the substance abuse team, but now has been transferred to the child and family team, which is really where her heart is for sure. She has always love working with kids. Garrett found a job at Craftco Metals Service, where he is a welder, like his grandpa, Allen Spencer before him. Next they began the hunt for a home, finally settling on one they loved, and buying it last year. Immediately after buying their house, their family grew by one fur baby named Charlie.

Next, came the word that Kayla and Garrett were expecting a baby in the summer of 2018. In due time they announced the gender of their precious little one. Their daughter is due on August 22, and we are all very 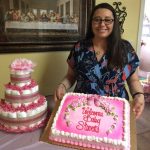 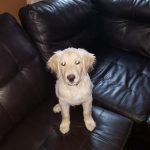 excited for them. Their love for kids is finally going to be showered on a child of their own. Last weekend, my sister, Alena Stevens, Garrett’s mom; and his sisters, Michelle and Lacey threw a baby shower for Kayla, Garrett, and their daughter, whose name is yet to be announced. We may not know her name yet, but we all love her already, and she is all set with everything she will need when she arrives. These last few years have been filled with exciting new changes for Kayla, who is just living the sweet life. Today is Kayla’s birthday. Happy birthday Kayla!! Have a great day!! We love you!!