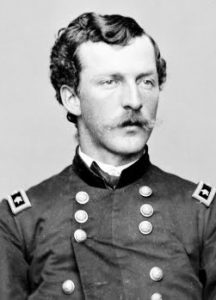 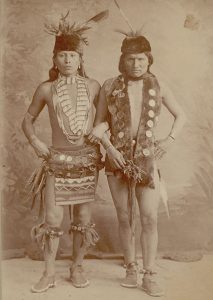 Who shot first? We will never know, but on December 29, 1890, that first shot started a massacre. What lead up to that fateful day? For all of his 27 years, Black Elk’s had watched as the way of life of the Lakota Sioux on the Great Plains was taken away. Black Elk was a medicine man, who witnessed years of broken treaties. He watched as the white men “came in like a river” when gold was discovered in the Dakota Territory’s Black Hills in 1874. He was there two years later when Custer and his men were annihilated at Little Big Horn. He saw the Lakota’s traditional hunting grounds evaporate as white men decimated the native buffalo population. The Lakota, who once roamed as free as the bison on the Great Plains, were now mostly confined to government reservations.

Life for the Sioux was very bleak during the winter of 1890. Then came a glimmer of hope with the new Ghost Dance spiritual movement, which preached that Native Americans had been confined to reservations because they had angered the gods by abandoning their traditional customs. Leaders promised that the buffalo would return, relatives would be resurrected and the white man would be cast away if the Native Americans performed a ritual “ghost dance.” Such a ritual was seriously scary for the “white man.” The settlers grew increasingly alarmed and worried that an uprising was coming. “Indians are dancing in the snow and are wild and crazy,” telegrammed a frightened government agent stationed on South Dakota’s Pine Ridge Reservation to the commissioner of Indian affairs on November 15, 1890. “We need protection and we need it now.”

General Nelson Miles arrived with 5,000 troops as part of the Seventh Cavalry, which was Custer’s old command. He ordered the arrest of several Sioux leaders. When Indian police tried to arrest Chief Sitting Bull, who was mistakenly believed to have been joining the Ghost Dancers, the noted Sioux leader was killed in the melee. Then, on December 28, the cavalry caught up with Chief Big Foot, who was leading a band of upwards of 350 people to join Chief Red Cloud, near the banks of Wounded Knee Creek. The American forces arrested Big Foot, who was too ill with pneumonia to sit up, let alone walk, and positioned their Hotchkiss guns on a rise overlooking the Lakota camp. As a bugle blared the following morning, December 29, American soldiers mounted their horses and surrounded the Native American camp. A medicine man who started to perform the ghost dance cried out, “Do not fear but let your hearts be strong. Many soldiers are about us and have many bullets, but I am assured their bullets cannot penetrate us.” He implored the heavens to scatter the soldiers like the dust he threw into the air.

The cavalry went teepee to teepee seizing axes, rifles and other weapons. As the soldiers attempted to confiscate a weapon they spotted under the blanket of a deaf man, who could not hear their orders, a gunshot suddenly rang out. It was not clear which side shot first, but within seconds the American soldiers launched a hail of bullets from rifles, revolvers and rapid-fire Hotchkiss guns into the teepees. Outnumbered and 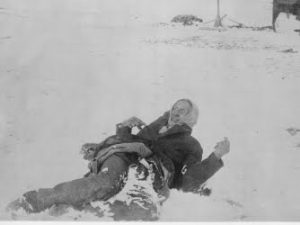 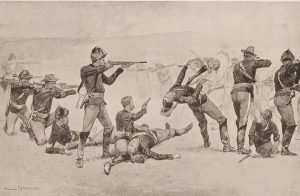 outgunned, the Lakota offered meek resistance. Big Foot was shot where he lay on the ground. Boys who had been happily playing leapfrog were mowed down. In just a matter of minutes, at least 150 Lakota Sioux Indians were killed along with 25 American soldiers. Half the victims were women and children. The soldiers might have thought they were being attacked…it’s hard to say. Nevertheless, that first shot brought about a massacre.