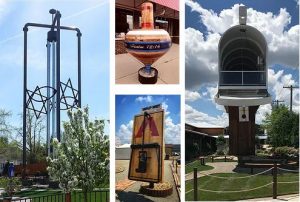 Casey, Illinois is a small town with just 2,635 people…as of 2018. Normally it would be considered a sleepy little town where nothing much happens, but Casey, Illinois is actually famous, and holds twelve world records. Yes, I said twelve!! That is a lot for a town of any size, and even more so for a town of only 2,635 people. Nevertheless, Casey has shown the world how it’s done.

Their world’s record quest began with the Wind Chime in 2011. The framework for the Chime was assembled on site November 17, 2011. The huge wind chime features braces with Christian symbols. These add support, but more importantly they remind us of the importance of faith in our daily lives. The chimes were added to the frame on December 15, 2011. Many local residents attended the final touch on the structure, even though it was a cold day, it was also very exciting. With the world record the chime brought a new industry to the town…tourism. People like this sort of thing.

The next world record was the giant Golf Tee. This was suggested by the local Country Club president as a way of encouraging more interest in Casey’s public golf course. Work on the Tee in July of 2012. They team laminated lumber together to form the tee’s rough form. This took five months. Once the pieces of wood were secured, a chainsaw and sander were used to shape and smooth the surface. The Golf Tee claimed its “World’s Largest” status in May of 2013.

The Rocking Chair proved to be the most difficult World’s Record attempt. This behemoth of a project took two years to complete. The Chair claimed its world record title on October 20, 2015. In order to achieve the World’s Largest designation, the Rocking Chair needed to rock! This was quite a feat. It took ten grown men to accomplish this task! The headrest and armrests of the Chair include intricate carving and staining with a dove of peace featured on the center of the headrest and olive branches on the armrests.

In the years that followed, the wooden shoes (which can hold 15 people), the pitchfork, the mailbox (where you can actually mail a letter and go inside to do so), the key (an exact replica of the key for Jim Bolin’s work 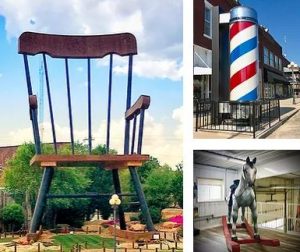 truck), the gavel, the swizzle spoon, the golf driver, barber pole, and the teeter totter followed in quick succession…all earning world record status. There are many other “big” things that don’t have world record status, but are very cool, nevertheless. The big antlers, the big bird cage, the big softball bat, the big spinning top, the big toy glider, the big wooden token, the big pizza slicer, the big knitting needles and crochet hook, the big bookworm, the big nail puzzle, the big anvil and horseshoe, the big cactus, the big ear of corn, the big mouse trap, the big rocking horse, the big yardstick, the big pencil…all grace different areas of the town. I’m sure the idea was to be a unique town, and they have certainly achieved that status. While this might have started as a way to attract tourism, it proves one thing for sure…it is possible to be a little big town.