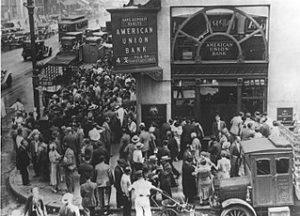 When we think of a bank, we expect that they will have an unlimited amount of money to cover any withdrawals the public might care to make. That thought really isn’t accurate at all. Banks typically hold only a fraction of deposits in cash at any one time, and lend out the rest to borrowers or purchase interest-bearing assets like government securities. As normal banking procedures occur, the money placed in bank care by depositors is loaned out to other people, but then replaced plus interest. The cash flow in the bank normally rolls merrily along in deposits, withdrawals, loans, and payments…as long as nothing goes wrong that is.

The stock market crash of October 1929 left the American public in a panic, about the economy, the future, and the stability of the banks. People were spending less and so the investments and loans began to decrease, which lead to a decline in production and employment. The ensuing snowball effect was further compounded when the nation’s economic woes led to a series of banking panics or “bank runs,” during which large numbers of anxious people withdrew their deposits in cash, forcing banks to liquidate loans, and ultimately leading to bank failure. The largest collapse was New York’s Bank of the United States in December 1931. The bank had more than $200 million in deposits at the time, making it the largest single bank failure in American history. Wealthy people began pulling their investment assets out of the economy. Bankruptcies were becoming more common, and peoples’ confidence in financial institutions, such as banks, rapidly eroded. Many of those people never fully trusted banks again after that. Some 650 banks failed in 1929, and the number rose to more than 1,300 the following year.

The last wave of bank runs continued through the winter of 1932 and into 1933. By that time, Democrat Franklin D. Roosevelt had won the presidential election over the Republican incumbent, Herbert Hoover. Almost immediately after taking office in early March, Roosevelt declared a national “bank holiday.” All banks were closed until they were determined to be solvent through federal inspection. Roosevelt called on Congress to come up with new emergency banking legislation to further aid the ailing financial institutions of America. The Banking Act of 1933 established the FDIC, or Federal Deposit Insurance Corporation. It also separated commercial and investment banking, and for the first time extended federal oversight to all commercial banks. The FDIC would insure commercial bank deposits of $2,500 (later $5,000) with a pool of money collected from the banks. Small, rural banks were in favor of deposit insurance, but larger banks, who worried they would end up subsidizing smaller banks, opposed it. The public supported deposit insurance overwhelmingly. Many hoped to recover some of the financial losses they had sustained through bank failures and closures. The FDIC did not insure investment products such as stocks, bonds, mutual funds or annuities. No federal law mandated FDIC insurance for banks, though some states required their banks to be federally insured.

In 2007, problems in the subprime mortgage market precipitated the worst financial crisis since the Great Depression. Twenty-five US banks had failed by late 2008. The most notable bankruptcy was Washington

Mutual Bank, the nation’s largest savings and loan association. A downgrade in the bank’s financial strength in September 2008 caused customers to panic despite Washington Mutual’s status as an FDIC-insured bank. Depositors withdrew $16.7 billion from Washington Mutual Bank over the next nine days. The FDIC subsequently stripped Washington Mutual of its banking subsidiary. It was the largest bank failure in US history. Congress passed the Dodd-Frank Wall Street Reform and Consumer Protection Act in 2011, which permanently raised the FDIC deposit insurance limit to $250,000 per account. The Dodd-Frank Act expanded the FDIC’s responsibilities to include regular risk assessments of all FDIC-insured institutions.